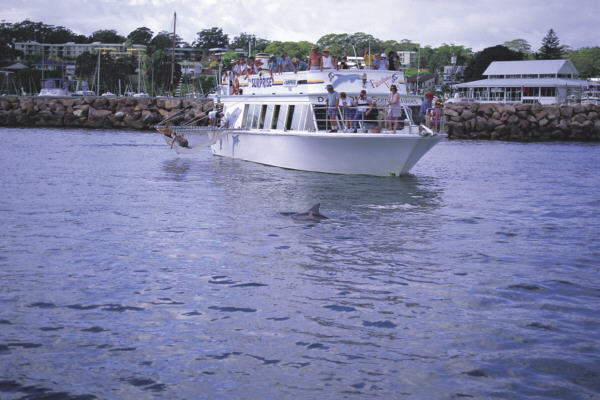 A popular stopoff point for those on the Sydney to Brisbane trail (or vice versa). Coffs Harbour is a scenic, friendly place to relax and enjoy the sun. Coffs is known where the mountains meet the sea, its beaches and banana plantations give it tropical atmosphere.

The country and mountains behind Coffs offer a chance to explore beautiful Australian countryside, while the nearby National Parks make Coffs a great place to simply get away from Sydney for a while, to explore everything the area has to offer.

The lush coastal hinterlands are well worth exploring. Nearby are also some of Australia’s largest coastal waterways, with heathlands, rainforests, estuaries, lakes and parklands. Just north of Coffs, rolling dunes back the beaches for 26kms at the Coffs Coast Regional Park.

At the Coffs Coast Regional Park, there are picnic grounds, chances for water sports and plenty of surf, swimming, diving and fishing to be done.

Other nearby National Parks include Ulidarra, an old growth forest with koalas and other native fauna. Moonee Beach Nature Reserve just north of the harbour at Coffs protects the estuary and surrounding coastal area.

Dorrigo National Park has the Rainforest Centre Skywalk, a suspended walkway over the upper cover of the rainforest. On the walk you can get magnificent views of the valley and the Ranges.

The Town of Coffs

Coffs Harbour itself has a collection of some very good restaurants to enjoy, an excellent range of accommodation including luxury resorts, while the subtropical weather is a delight the year round.

The beaches in Coffs include Boambee, Jetty and Park Beach. But don’t limit yourself to them, the beaches in the surrounding Coffs Coast area are aplenty and stunning.

Places to Visit and Attractions

One of the must places to visit would have to be the Beacon Hill Lookout, with dramatic cliffs and surrounding beach and ocean views, stretching off into the distance.

Another place would be Muttonbird Island Nature Reserve, where there is whale spotting in June to September, thousands of muttonbirds and a place of significance for Aboriginals, dating back thousands of years. The jetty that allows you access to the island dates back to 1892.

The Big Banana is well known to Australians, or at least to all that have been to the Coffs Coast. There are things for kids to do there while you can learn about the Aboriginals that inhabited the region, alongside historical exhibits and the exotic plants on view.

At the Clog Barn, there is a miniature Dutch Village complete with waterfalls, a locomotive, canals and windmills. And yes, you can buy wooden clogs there.

Glenreagh Mountain Railway - Ride a historic steam train. The Pet Porpoise Pool allows you to swim with the dolphins.

There is a large variety of stays available in Coffs and the surrounding area in the form of everything from hostels and backpackers to farmstays, bed and breakfasts, caravan parks, self contained units, hotels, motels and some very nice resorts.

Hotels in NSW and Australia

Further Reading about the North Coast

Maps of the NSW North Coast 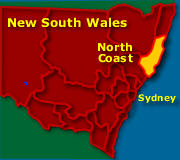