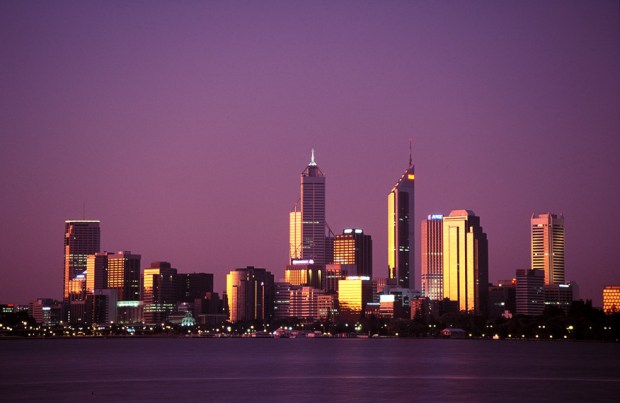 Next: Perth Tours and Cruises

The city of Perth is cosmopolitan with the charm and intimacy of a small town, a sunny climate and a friendly and hospitable atmosphere.

The City center is referred to as the Perth CBD, which stands for the Central Business District.

The mild Perth winter lasts from June to the end of September. It is a rainy season, interspersed with chilly yet sunny days. A typical Perth winter day may fall between 60-65F.

There are sometimes thunder storms. Spring begins at the start of September as the weather quickly warms to fine sunny conditions again.

Perth Weather for Today and Forecasts

Currency: The local currency is the Australian Dollar, which is a decimal currency in which 1 A$ is equal to 100 cents.

Telephone: The Australian country code is 61.

By Air: Because of the distance between Perth and the other big cities, flying is how most visitors arrive. Perth Airport is located some nine miles northeast from the city centre. Phone +061 8 9478 8888.

The domestic terminal is served by local bus routes 37 and 39 as well as the more expensive Airport City Shuttle and Fremantle Airport Shuttle, which also serve the international terminal.

South of the city centre is Jandakot Airport, which handles some regional flights including flights to Rottnest Island.

By Cruise Ship: Ships dock in the Port of Fremantle.

2. Greyhound and Integrity coaches depart from the bus station at 554 Wellington Street near the Perth train station.

The East Perth Terminal is the terminus for long distance trains. Transwa (Phone 1300 662 205) has trains to Bunbury and Kalgoorlie.

Great Southern Railway operates the Indian-Pacific to Sydney. with stops at Kalgoorlie, Adelaide and Broken Hill. The East Perth Terminal is part of Transperth’s suburban train network with frequent trains to the city centre and Fremantle.

Showing the location of Perth attractions, shopping areas and places to visit- see the Perth Map.