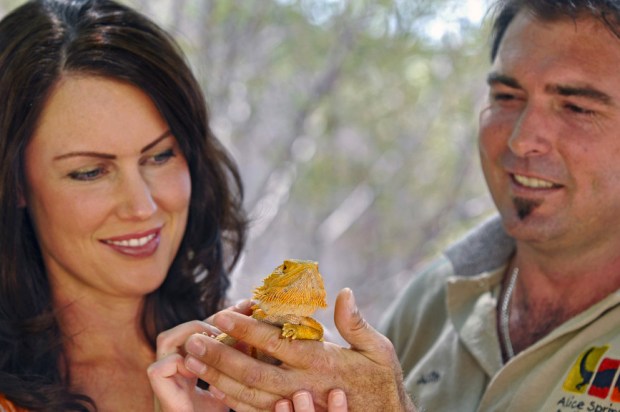 Though many of the parks in the Northern Territory are truly remote, they are accessible during most of the year. There are also tours available, just for the day or longer, many of these are by the traditional owners of the land which can give you unique insight into the relationship and affinity that Aboriginals have had with their country over the many millenia.

The parks are of course, for the protection of the landscape, as well as the animals, birdlife and plants that inhabit the areas. They are there not only for your enjoyment, but for the enjoyment of generations to come.

There are numerous parks and reserves in and around Darwin, including world famous Kakadu and Litchfield National Parks.

Garig Gunak Barlu National Park, just to the north of Darwin, protects the four and a half thousand square miles of the peninsula, islands and the waters surrounding them. See a map Darwin Surrounds Map.

Be aware of Crocodile safety - observe warning signs! Only swim in areas designated safe to do so. Carry and drink plenty of water. You should always obtain reliable local advice, especially if you wish to explore in the summer months.

Over 200,000 visitors from Australia and the rest of the world go to the National Park of Kakadu every year - a very beautiful place with World Heritage listing.

Kakadu is a very ancient landscape. There are wetlands, rocky escarpments and waterfalls to visit and aboriginal rock art that dates back tens of thousands of years.

Kakadu National Park also has a huge variety of wildlife with over 300 bird species, plus wallabies, kangaroos, dingoes and frill-necked lizards. In fact there are more than 60 mammal species, over 100 reptile species and more than 1,700 plant species.

Litchfield National Park, approximately 129kms to the south of Darwin is also a gloriously beautiful place - Stunning landscapes of emerald green with a huge variety of wildlife and birdlife, waterfalls and crocodile free waterholes to swim in.

Watarrka National Park - This park has the stunning Kings Canyon, with steep cliffs, with animal and plant life protected by gullies. Occupying the west part of the George Gill Range, it is rugged terrain surrounded by desert.

This spectacularly beautiful place is known as Karlu Karlu by the local traditional owners of the land. Some 400 kilometres north of the town of Alice Springs is leased to the NT government who work together with the owners to protect the park and make it accessible to the many visitors that come here. Sacred to the landowners, the region has huge granite boulders that make it such an attraction.

Another park well worth visiting is the Uluru-Kata Tjuta National Park. Sacred to the Aboriginal people, the park has been handed back to the local Anangu people and is now leased by the Australian Federal Government from them.

Uluru (formerly Ayers Rock) located in the Uluru-Kata Tjuta National Park is a natural wonder of the world, a monolith of red colour that dominates the flat desert landscape surrounding it. The colours change depending on the position of the sun during the day, after rain, it becomes a shiny black. Bring your camera.

You can find out more information about the many NT parks and reserves throughout the rest of the Territory here http://www.nretas.nt.gov.au/.

Topic: Parks in The NT