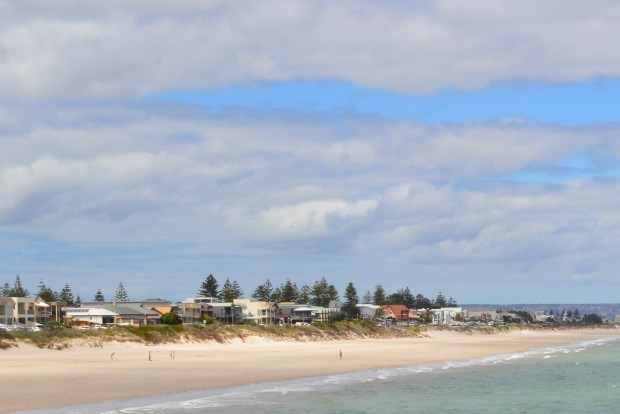 Next: South Beaches of Adelaide

Beaches north of the historic Glenelg include West Beach, Henley, Grange and Semaphore. They have Surf Life Saving Clubs so are more safe for families when patrolled, bearing in mind that you need to swim between the flags.

Most of the beaches here have excellent places to jog or just walk on their long promenade, or along the watermark. Being waveless, good for wind surfing when there is wind and peaceful swims, long or short.

The waters here of the Gulf of St. Vincent are noted for its cleaniness. Bordered by Yorke Peninsula and the Fleurieu Peninsula (West and East, respectively) with its entrance to the Southern Ocean.

The beachside suburb of West Beach with its West Beach S.L.S.C. has soft white sands that stretch north and south. Like all of Adelaide’s beaches, it is very popular in summer.

Henley Beach also has a long beach that stretches south and northwards, where Grange is located. Another feature of this pretty beach is the long jetty, a favourite shading place on long hot summer days.

Grange Beach, fronting the beachside suburb of the same name. Also has a long jetty stretching out into the Gulf of St. Vincent. Noted for its lack of crowds when other beaches near the city centre would be more crowded.

Great for swimming, as it is located in a cove.

The north-west Adelaide suburb of Semaphore is also located on the Gulf of St. Vincent shoreline. The beach is backed by an excellent collection of restaurants and eateries.

South West of the City: Beaches of Adelaide