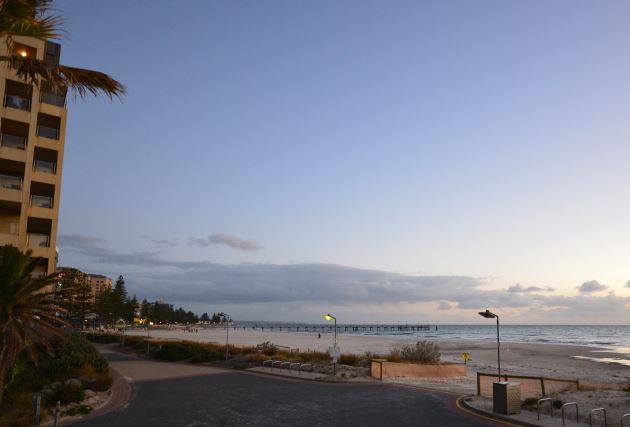 You can find splendid beaches all along the west of Adelaide

Next: Northern Beaches of Adelaide

From Port Gawler Conservation Park in the northwest to the southeast of Adelaide on the shoreline of Gulf St. Vincent, there are numerous stunning beaches to enjoy. Here are some of the popular places along the coast, from north to the south.

Although the beach at Port Gawler is backed and fronted by tidal flats, there is some great fishing to be done here. Part of the Samphire Coast, there are other beaches to enjoy here, including Middle Beach and Thompson Beach. Much of the area here is undeveloped, great for birdwatching, fishing and nature walks.

Some forty minutes north of the city, St. Kilda is a beachside suburb of Adelaide. There is a well known adventure playground there, a favourite with the younger kids.

It is also home to the Tramway Museum, with a number of restored working trams that used to run along the streets of the city. Another place to visit here is the St Kilda Mangrove and Interpretive Centre along with a walk that takes in the natural surrounds.

This narrow land strip of sand has a long beachfront. From the suburbs of North Haven to Semaphore South, there is a series of white sand beaches along its shoreline, including Semaphore.

Just further south is the Adelaide beachside suburb of Grange. The beach of Grange is considered one of the best of Adelaide, not being so busy as Henley or Glenelg. There is a long jetty there, the sand soft and the water is clean.

The beautiful beach of Henley is backed by an interesting collection of restaurants, eateries and bars. There are plenty of entertainment events during the warmer months and it also has a long jetty, offering shade to beachgoers in summer and chances to fish.

About the beaches to the North West of the City: Beaches of Adelaide.