Off the coast of Queensland, Fraser Island is a wonderful place to explore. Located not far to the north (approx. 200kms) of Brisbane near Maryborough.

The island sits opposite the Queensland coast, separated by the great Sandy Strait and Hervey Bay. On the island, you can find rain and eucalyptus forest as well as fresh water lakes that are crystal clear. The sand dunes are spectacular with sparkling white sands.

Despite logging in the earlier parts of the previous century, there are still trees over a thousand years old while the island is known to have been inhabited by humans for some five thousand years. There are numerous Aboriginal heritage sites, when you visit them you can see why they loved this place.

Excellent walks are available of varying difficulty and lengths. You can even embark on the Fraser Island Great Walk, covering some 90 kilometres, you would need to stay overnite so please arrive with ample daylight.

There are over 100 lakes on the island, filled with clean water. There are also small streams, many of them feeding into the lakes as well as those running off to the ocean.

The freshwater lakes on the island include Lake Allom, surrounded by a rainforest lined with massive trees. Freshwater turtles inhabit the lake.

Lake McKenzie, further south, is surrounded by eucalypt trees and lined with white sands. Lake Boomanjin is coloured with red from the surrounding clays, other lakes include Boomanjin, Lake Wabby, Garawongera and Lake Bowarrady.

Atop a bedrock of ancient lava, Fraser Island has been formed over 800,000 years of sand being pushed onshore by the elements. Running along the eastern side of the island is a 75 kilometre beach, sometimes small planes land there and any vehicles on the island must give them right of way.

At Cathedral Beach, there are red sand formations that back the beach for some 18kms. Other coloured sands can be found at the Pinnacles and Red Canyon.

There are dingoes on the island, some of the purest found anywhere in Australia. Although there has been some cross breeding with domestic dogs, they are by nature still wild and must be treated with respect.

Do NOT feed them, they certainly do not need human foods and dogs are not allowed on the island, to prevent further cross-breeding. Also, do not get too close to them to take photos, they have occasionaly been known to bite and a young boy exploring away from his parents was reputedly killed by them in 2001.

Other wildlife include snakes, some of them poisonous and occasionally during the warmer months, crocodiles have been spotted on and around the island. Needless to say, be wary of them.

Other wildlife found on the island include swamp wallabies, echidnas, possums and bandicoots. Rare birdlife also lives and breed on the island.

Camping permits can be acquired from the Queensland Parks and Wildlife Service at the Great Sandy Information Centre Phone: +061 7 5449 7792. Access to the island is by ferry, embarking from Urangan, River Heads and Inskip Point and there are cruises available from Hervey Bay.

There is limited access for vehicles, but only high clearance 4 Wheel Drives are allowed and permits are needed. 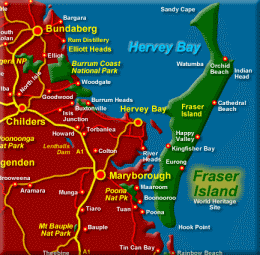