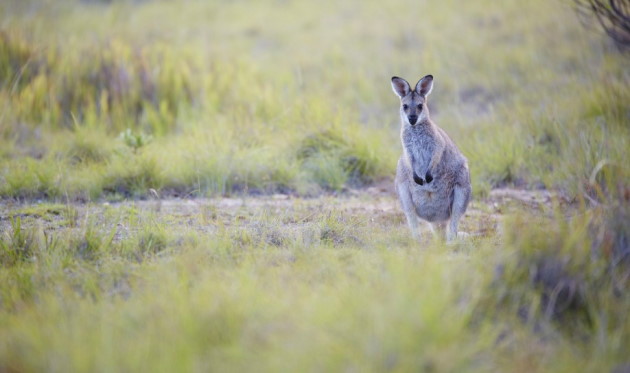 Next: Brisbane and Surrounds: See Koalas

The Girraween National Park in the Granite Belt of the Great Australian Divide is famed for its native wildlife, flora and unusual rock formations of granite. Rock climbing and walks are two of the main activities in this scenic and mountainous region.

Normally the coolest part of the state being on the southern border of Queensland with NSW and in the mountains, the relatively low rainfall here makes it an enjoyable place to visit the year round. There have been snowfalls, hail and sleet, although rare, in the winter when the nights can become very cold.

Within the park, there are cascading and clear streams, wetlands and open forest.

Wildlife found here include kangaroos, turtles, wombats and the spotted quoll, a carnivorous marsupial, once known as the ’Tiger Cat’. In the forests, you can spot red-necked wallabies, brush-tailed possums and echidnas.

Abundant birdlife seen here include the lyrebird and the Turquoise Parrot.

In the Spring, there is an a burst of colours, from the abundant wildlowers, more than 800 species. In fact, the Aboriginal name of ’Girraween’ means place of flowers.

The National Park is marked by unusual rock formations, including balancing rocks, some quite massive. Given such names as the First Pyramid, Second Pyramid, The Sphinx, Turtle Rock, Underground Creek and the Eye of the Needle, their shapes all suggest the places they were named after.

There are plenty of graded walking trails that can take you to these natural attractions. Mount Norman is the highest in the range, 1267 metres in height, a scenic walk of some 11 kilometres.

The Granite Belt, where the park is located, is a mountain range forming part of the Australia Dividing Range, which stretches from the south of Victoria to north Queensland.

Things to do here include camping, picnics, long and short walks and rock climbing. The walks are from short to long with different gradings, from gently sloping tracks to those with exposed granite inclines.

Located some 260 kilometres in the south west of Brisbane, the southern border of the park is on the border of NSW. Take the New England Highway, the turn off is 26 km. south of the historic town of Stanthorpe or 30 km. north from Tenterfield. Heading further east through the Wyberba Valley, you can find the Girraween NP Information Centre.

At the Girraween Visitor Information Centre you can find out more about the natural features of the park, the native animals and the many wildflowers as well as the places to visit.

Another park nearby worth visiting is the the Main Range National Park, in the Southern Downs region of Queensland. Spectacular lookouts, sub-tropical rainforests and waterfalls.

There are designated areas where camping is allowed. You can also obtain camping permits from the Queensland Parks and Wildlife Service. Phone 13 74 68 or visit Queensland Camping for more information.

Due to its climate, cool and dry, this region has developed into a major wine region of Australia. There is in excess of fifty wineries located here, producing fine wines including the red Cabernet Sauvignon, Shiraz, Merlot and Verdelho as well as the white Chardonnay. The wineries and the National Park make this region a popular place to visit, including those who visit for the day from Brisbane.

Thought about a working Queensland? See about Working in Australia.