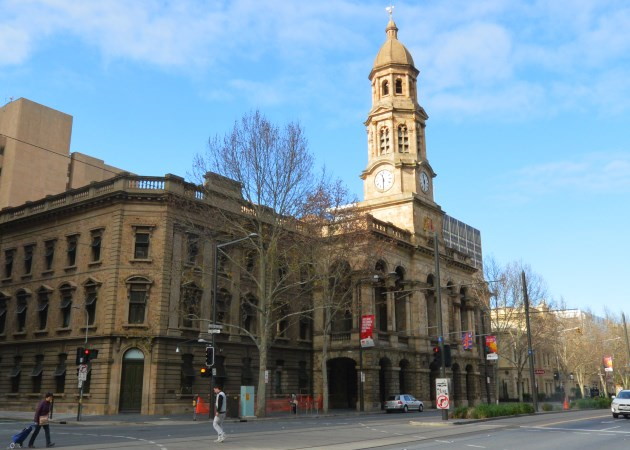 Next: Suburbs of Adelaide

No. 9 on the City Attractions of Adelaide Map: Places to Visit.

The city’s Town Hall of Adelaide was opened in 1866 and has been an important venue for gatherings and events since then. Its distinctive clock was installed in 1935 in the tower.

Constructed from Tea Tree Gully freestone and Dry Creek bluestone, the building was designed by Edmund Wright. There is a grand marble staircase leading to the upper floor as well as marble columns in the main hall. Almost all of the materials used in the building came from local sources.

Amongst the more important events held here was the first meeting of the Australasian Federation League of Australia, formed to campaign and work towards the federation in South Australia.

To this day the town hall is an important venue for the city, not only for meetings but also concerts and events.

There are regular concerts held here. The Adelaide Symphony Orchestra, the Australian Chamber Orchestra and the Australian String Quartet have all appeared here in its main hall with its impressive acoustics and continue to do so.

It is actually considered one of the five greatest acoustic venues in Australia for symphony orchestras.

Located on the stage in the main hall is a large sized pipe organ, originally installed in 1877. Only recently was it replaced by a more modern counterpart in 1989. Boasting 61 stops and 4500 pipes, it is noted for its ability for performances of Bach compositions, as well as later works of the

The most famous event would have to be when the Beatles performed here on its front balcony in 1964. More than three hundred thousand spectators attended the appearance.

There are also regular art exhibitions held here, including the works of painters, photographers, sculptors and video creators.