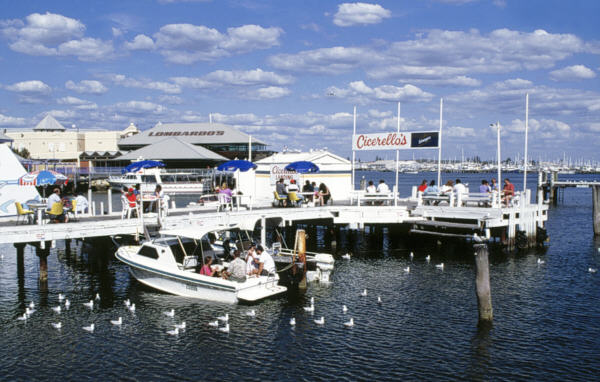 Fremantle, having virtually grown into a beach-side suburb of Perth is only 20 mins drive from the CBD.

Certainly a historic city, Fremantle near Perth in Western Australia has kept and restored many of its buildings from the 19th Century, there are splendid examples built during the early Gold Rush days.

When Fremantle was first established in 1829 at the mouth of the Swan River, it was meant to serve as the main port for the new Colony. However, it really did not play that role till the end of 19th Century, when a suitable harbour was dredged.

The town failed to grow until the gold was discovered in the 1890s. In 1987, the America’s Cup race was held here, launching Fremantle onto the world stage.

Nowadays, Fremantle is a very much alive, yet laid back coastal city with a thriving port for commercial shipping as well as pleasure craft. It also has a thriving nightlife scene, with a growing collection of restaurants, pubs and eateries. At Fishing Boat Harbour, there are waterfront restaurants with great views to Rottnest Island and grand ocean sunsets.

The arts and culture are well represented here, numerous art galleries inhabit the restored buildings, you can also visit the Fremantle History Museum and Arts Centre. Located in a restored Gothic design building originally purpose built as an Asylum for the Insane, with exhibitions, music concerts and displays of works by Western Australian artists.

There is an Art and Culture Trail that explores the artistic and creative side of Fremantle. Taking in many of the studio galleries and art galleries, this walk takes you to more than 30 Fremantle places that exhibit and sell Australian arts and works.

Other exploratory walks around Fremantle concentrate on history, hotels and breweries, Aboriginal heritage and the waterfront.

The Batavia, a ship of the Dutch East India Company (VOC) that was shipwrecked off the coast in 1629 is one of the main features of the Western Australia Maritime Museum. A story of mutiny, murder and cruel justice, the Batavia tradegy continues to fascinate.

There are other shipwrecks, including the Zuytdorf, the Zeewijk and the Gilt Dragon, with artefacts and displays of what and where it happened.

Stop at the Roundhouse, built in 1831 and the oldest surviving public building, originally a gaol.

Built by convict labour is the old Fremantle Jail. Tours of the jail are available.

How to get to Fremantle: There is a regular train service to Fremantle from Perth from the City Railway Station. Buses are available from Perth City Centre Bus Terminal. In Fremantle, there is a free CAT bus service leaving from the Fremantle Train Station. Only a short drive of approximately 20 mins south west from the Perth CBD (Central Business District).

Showing the location of Perth attractions, shopping areas and places to visit- see: