Next: Cronulla Places to Eat

Ideal for those looking for scenery, history, swimming, surfing and hiking. The only Sydney beach with a nearby train station, it is easy to get to and an enjoyable day out activity.

Take some time on the popular Cronulla Walk. Taking about 2 hours, the walk encompasses beaches, ocean pools and various scenic views such as the Bass and Flinders Memorial with Port Hacking and Bundeena in the distance. Be sure to bring a hat and sunscreen, even in winter Sydney has bright sunny days.

Weather for today and forecasts for the Cronulla Beaches

On the southern side of Botany Bay, at the Botany Bay Park is Kurnell. At this site, Captain Cook made his landing in 1770. Just down the hill from Cronulla train station are the ferries to Bundeena. Bundeena is a pleasant village located in the Royal National Park. 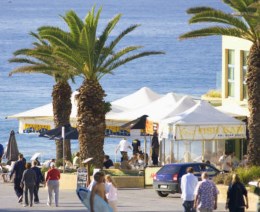 Great hiking is available in the Royal National Park and you can swim at Jibbon Beach. Aboriginal rock art can be seen just beyond Jibbon.

No impact camping is available at some of the remote beaches in the Royal National Park, and there is a scenic walk from Bundeena to Oxford. If you wish to camp there, you will need to get a permit from the National Parks and Wildlife Service phone +061 2 9542 0648.

Depending on the tides, there are cruises around Port Hacking available from Cronulla as well.

Nearby, at Loftus, you can find the Sydney Tramway Museum. They have over 80 trams from different parts of the world and you can ride one of the original Bondi Trams there. Open on Wednesdays, Sundays and Public Holidays as well as school holidays.

Australia’s only nuclear facility is located in the Sutherland shire. Used to generate products for medicinal use, there are tours available. Photo ID is needed.

There is some great shopping available at the Cronulla Plaza, and you can find surfwear, travel, professional services, speciality shops and fresh food. There’s also a plethora of places to eat including al fresco dining.

In the second week of September, there is the Spring Festival for entertainment and bargains. In May, you can go to the Cronulla Food and Wine Festival, another popular annual event.

A great way to explore the Royal National Park waterways and Port Hacking would be to hire a houseboat or boat and explore for yourself.

Sutherland Shire in South Sydney has the beautiful Cronulla Beaches and is close to four National Parks, yet easily accessed from Sydney City Central.

Beaches of Sydney by Public Transport

The ever popular beaches. You can get to them by bus or train from the city center:

Last but not least, beaches that line the east coast of Sydney: