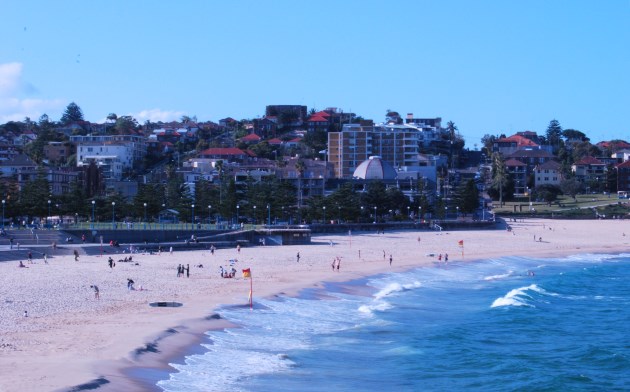 By Bus: Sydney Beach of Coogee. Note the Lifeguard Flags

Next: Car Rentals in Sydney

The Sydney metropolitan area has lots of beaches, more so than any other Australian city. They are divided by the city centre and the harbour, all on the east coast.

Note: Swim between the flags! Not all beaches are patrolled by lifeguards or lifesavers at all times, except during busy holidays and weekends during the warmer summer months.

The most popular in Sydney are Bondi, Tamarama, Bronte and Coogee. Note however, after heavy rainfall days at these beaches the water can become clouded and sometimes not recommended for swimming.

The closest beach to the city centre is Bondi Beach, a favourite hotspot not only with visitors but Sydneysiders as well. However, there are many beaches directly east of the city Central Business District (CBD) that are thoroughly enjoyable, but not as crowded. On weekdays, however, unless the day is particularly warm you can enjoy even Bondi with its spectacular gold sand, surf and marked safety flag swimming zones.

The Northern Beach suburbs over the Sydney Harbour Bridge are also most accessible by buses from the city. These beaches are splendid for those warm days, just about all of them are patrolled on weekends and school holidays by surf life savers with flagged areas to swim.

With sixteen beaches to its credit, the Sydney Northern Beaches have plenty to offer, notwithstanding excellent surf spots as well as for swimming, diving and snorkelling.

The Cronulla Beaches can be reached by train from Central Station as well as by bus. As the train route is more direct, it takes less time. Arriving at the train station, its a quick walk east to the beaches from there (There are more than one).

Previous: About Tranport in Sydney