The Three Sisters stand prominently in the World Heritage Area of the Blue Mountains.

Located just to the west of Sydney is the World Heritage Area of the Blue Mountains. The coolness of the mountain atmosphere, the wildlife and the sweeping vistas of natural scenery are a big attraction to not only Sydney-siders but overseas visitors as well.

Covering some 1.03 million hectare of mountainous forests of eucalypt and sandstone plateaus, this region protects up to ten percent of Australia’s biodiversity of flora as well as many different species of fauna.

There are even species of plants here that were thought of having disappeared long ago such as the Wollomi Pine. Much of the trees and plants that survive here were adapted from the trees of the Gondwana before the continent of Australia separated from the rest. 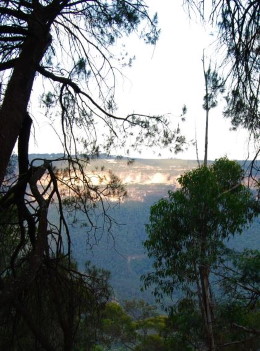 Within the park, you can explore on foot with more than 140kms of walkways, trails and paths. Many are easy, some are more difficult and longer, those on the ridges and escarpments offering great views while those in the lower parts give you a chance to experience the bush in all its splendour.

There are inspiring lookouts in places in the park, there are waterfalls, historical sites and much to see, including unusual rock formations, the diverse native animals (if your quiet) and birds, such as multi-coloured lorrikeets. Incidently, the largest predator found here is the Dingo, although they normally stay well away from humans.

Those who wish to experience the park in a more relaxed pace, check out the Scenic Cableway, Scenic Skyway and the Scenic Railway at Katoomba. A must visit would be to the Blue Mountains Heritage Centre, near Blackheath:

Located near Sydney in Australia, the Blue Mountains NP is a place to enjoy scenic walks, outdoor camping, climbing and explore the rich Aboriginal heritage that this place harbours. This region, close to pristine, protects the 400 animal species found here, as well as whole hosts of colourful birdlife and diverse flora that have managed to persist for millenia.

Not far from Sydney and easily accessible by train, car as well as a variety of tours from the city. See the mountains in relation to the city:

Besides just enjoying being in the park, you can also go horseriding, canyoning, abseiling, rock climbing and mountain biking. On the way back to the city, you can even enjoy a nice dinner at one of the restaurants in the historical towns dotting the mountains. You will pass through a number of them along the main highway that traverses the mountains from the west to the east coast.

The World Heritage Listed Area of the Greater Blue Mountains consists of 10,300 sq. kms. of mountains, valleys, ridges, plateaus and forests, primarily eucalypt. These trees, during warmer parts of the day, release their oil along with water into the atmosphere, giving the mountains their name and its bluish tinge.

The Gardens of Stone, Thirlmere Lakes, Kanangra-Boyd, Nattai and Wollemi as well as a number of conservation reserves are adjacent, together forming the World Heritage Listed Area.

Since time immemorial, Aboriginals have lived in this region. The Gundungurra, Daruk and Wiradjuri people have a strong historical connection to the land here. There is plenty of evidence remaining in many places, not all of it marked, so please be careful when exploring. The known Red Hands Cave is marked and well worth a visit with an Aboriginal tour guide.

There are indigenous tours available of the region. With them, you can learn about the knowledge, beliefs and medicines they used, even try some real Aussie tucker (food).