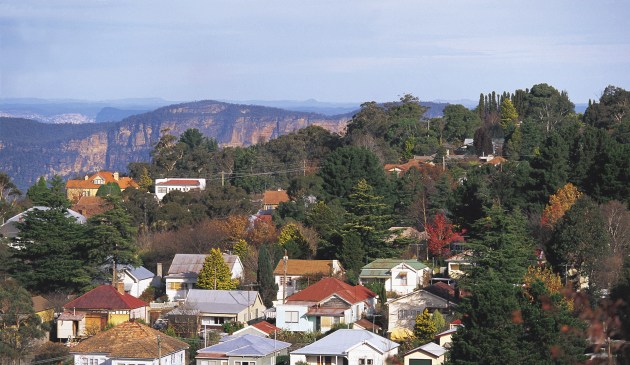 Next: Sydney Suburbs to Visit

Sydney Surrounds - Places, Attractions, Parks and Things to Do

Sydney was built around its beautiful harbour, yet not far from the city there are large swathes of natural parks, sandy beaches and gorgeous coastal areas on the Central, North and South Coast.

Then there is the Hunter Valley, Australia’s oldest wine growing region, while to Sydney’s West, the Blue Mountains. In the north-east is the stunning valley of Hawkesbury.

About an hour and a half drive from the city today, the Blue Mountains in the surrounds of Sydney has been a popular getaway since the 1860s, when the rail line was first built. In fact, it was popular well before that, with horse drawn coaches from companies such as Cobb & Co. taking people to the little mountain villages dotting the route and further west.

A great place to go bushwalking or even taking in an Aboriginal culture or eco tour, there is dramatic scenery in places like Katoomba and Blackheath:

Illawarra and the South Coast

Superb scenery flows along Illawarra Coast and the South Coast, starting about an hours drive south east of Sydney and extending all the way to Victoria. Dotting the coastline are charming fishing villages, stunning beaches and magnificent National Parks. The hinterlands has a thriving dairy industry, with lush pastures on rolling hills set against the backdrop of the rising escarpment of sandstone on one side and the sparkling ocean on the other.

Exploring by car is a good way to explore Illawarra and the South Coast, although there is a train service from Sydney to Wollongong and Kiama - Bomaderry and a number of bus services.

The coast south of Sydney is well suited for a short stay or longer, with plenty of choices in accommodation in places like Wollongong, Port Kembla and Kiama. Explore the South Coast further:

Set between the Southern Highlands NSW and the South Coast, is the scenic Kangaroo Valley. Preserved for posterity, this valley is a wildlife refuge but has also kept its heritage with the early settlers small farms and stony cottages.

North of Sydney is the compact but scenic Central Coast. Easy to reach via the M1 Motorway, Gosford is the first main stop. From there, it is easy to reach the many beaches, lakes and national parks that grace this region.

Water sports and fishing are big attractions but there is great diving to be had here as well. Visit here to find out why it has been a long favoured holiday spot for Sydneysiders:

To the North West, but still only an hours and half drive away, is the Hunter Valley. This region grows superb wines and has developed into a wine and gourmet paradise.

Set in a beautiful valley, here you can find luxurious accommodation for a pampering weekend, or stay in one of the many quaint bed and breakfasts and explore this region in a leisurely style, or even take an exploratory tour from Sydney:

Canberra, the capital of Australia, is a six hour’s drive South West of Sydney. You can find a wonderful collection of Australian National Museums and Art Galleries to visit.

Being the capital means also being the centre of Australian politics, while diplomats from all over the world and their entourages live and visit here. With a thriving industry of restaurants, shopping and nightlife to entertain them, Canberra is well worth visiting:

Radiating out from the Sydney center are the many suburbs, from the Northern Beaches in the north, accessible by ferry at Circular Quay and bus services from the city at Wynyard:

The Eastern Beaches, including Bondi and Coogee:

The Southern Beaches, including those at Botany Bay and Cronulla: