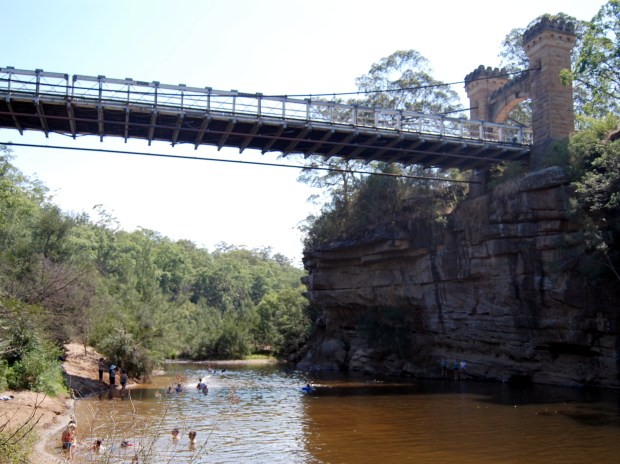 Just a short 20 minute drive south west from Fitzroy Falls in the Southern Highlands is Kangaroo Valley. This whole area is National Trust classified, beautiful and well worth visiting.

In fact, much of Kangaroo Valley is within the boundaries of Morton National Park, which itself has over 400,000 acres of green splendour.

The drive there itself takes you through the Cambewarra Mountains from Fitzroy Falls, with plenty of dramatic scenery of the Illawarra Coast, the sparkling aqua blue ocean, sandy beaches with waves rolling in and the green plains below.

Surrounded by the Barrengary Mountains and the Cambewarra Mountains, Kangaroo Valley is believed to be one of only seven fully enclosed valleys in the world.

Clinging to the steep slopes of the escarpment, you will see the remnants of lush rainforest alongside the Kangaroo River, with many small creeks criss-crossing the valley.

The rich volcanic soils of the area make it rich farming country and it became one of the main drawcards for the early European settlers.

The small township of Kangaroo Valley grew up around the river and when the beautiful sandstone Hampden Bridge was built in 1898, marking the entrance to the town, it opened up the area to visitors and has been attracting them ever since.

The historical Hampden Bridge is now the oldest surviving suspension bridge in Australia, it is certainly one of the most photographed.

In the town of Kangaroo Valley there is the Pioneer Museum. They have a wonderful collection of historic buildings which were all built originally in the Kangaroo Valley area. You can learn about almost everything there is to know about the valley, its history and early settlement. Set in the lush green valley with hiking trails, it is hard to resist. Phone (02) 4465 1306.

You will find some great cafés, arts and crafts galleries and some great little antique shops. There is also a wide range of restaurants, different types of accommodation and plenty of things to do. Sitting between Ilawarra and the Southern Highlands, Kangaroo Valley is a great place to base yourself for exploring both.

Kangaroo Valley is still host to a variety of native wildlife such as kangaroos, wallabies and wombats. You will also find plenty of exotic birdlife, including lyrebirds, cockatoos and multi coloured parrots.

The valley has plenty to offer visitors interested in quieter pursuits like picnicking by the river, canoeing, bushwalking or birdwatching. There is also a good selection of small guesthouses, B&Bs and caravan parks in idyllic locations.

Distance from Sydney and Canberra

Kangaroo Valley Places to See and Things to Do

Other places to visit include Canberra ACT, to the southwest and the Illawarra Coast of NSW to the east.

Further reading about the Southern Highlands: 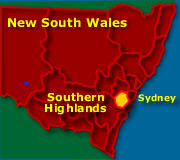 Previous: Places to Eat in Bowral