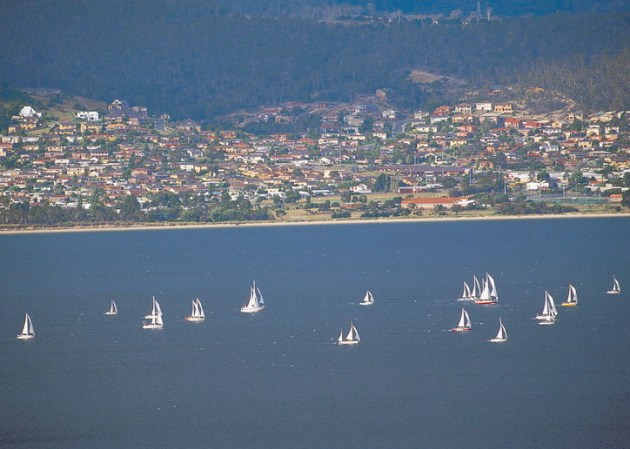 Hobart Sailing on the Harbour

Next: Fun Things to Do for Kids in Hobart

Hobart is certainly a beautiful Australian city. It began its early life as a penal colony in 1803, making it the second oldest city in the country.

The city abounds in convict history, surrounded by the untamed wilderness that makes up much of Tasmania. See the Hobart Map Tasmania.

Sitting on the Derwent River and harbour, with many of the original Georgian sandstone buildings restored, the city makes for a historically picturesque place.

The docks are a good place to start to explore Hobart. There are a number of museums, art galleries and attractions there, including the Maritime Museum of Tasmania.

Salamanca Place, a short walk from the docks is a great place to shop and has a lively weekend market and the Antartic Adventure, a museum that explores the Antartic experience.

Take some time to explore the Tasmanian Museum and Art Gallery. Resident in the oldest building in Hobart built in 1808, there is a wonderful Aboriginal display as well as colonial art.

Every year, starting from late December, the Hobart Summer Festival is held over eight days and nights, at Sullivan’s Cove. A celebration of the people of Tasmania, part of which is to herald the many sleek racing yachts from the Melbourne to Hobart (Westcoaster Start December 27th) and the Sydney to Hobart races (December Start 26th) ending at Constitution Dock.

There are plenty of opportunities for exploring Australia’s harsh convict past from Hobart. Port Arthur has been well preserved. To the north, Freycinet National Park is stunningly beautiful. Taking a cruise on the Derwent River is another popular way to view Hobart and the Surrounds.

At Wrest Point there is a revolving restaurant which has great views of the city. Fresh seafood and local game are items at a number of Hobart restaurants, as well as prime beef and poultry, served with fresh locally produced vegetables (pronounced vegies) and fruits.

Remember, the island’s southerly position makes for very cold winters so hiking and camping are not easy options at that time of the year.

See more about the current weather for Hobart and Tasmania - Hobart Tasmania Weather.

Places to go, see and visit near the city include Mt Wellington, National Parks, the Cascade Brewery, Wineries and the Cadbury Chocolate Factory - Hobart Surrounds.

Why not try a working holiday in South Australia - Work in Australia.

Previous: The History of Tasmania