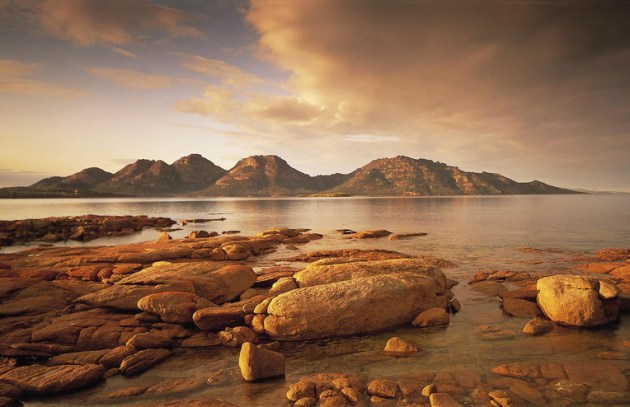 Hobart Tasmania is certainly a beautiful Australian city. Yet it began its early life as a penal colony in 1803, making it the second oldest city in Australia.

Convicts who had committed serious offences after arriving in Australia were being sent to the penal colony from 1804 on and sent to various stations around the island. You can visit a number of these early places of punishment, including Port Arthur and Sarah Station with their restored buildings, museums and tours.

Many of the convicts were young and Irish, many who had gotten into trouble for their belief in a free Ireland. Sending them to far away Tasmania was seen as a solution to the growing demands for independence.

Tasmania attracted free settlers as well. Many settled by the Derwent River and its deep harbour at the mouth to export things like fruit and wool to other parts of Australia and the British Empire.

On the 1st of January 1856, the name Van Diemen’s Land was changed to Tasmania, to try and erase the reputation the island had built up as a penal colony and towards a new future.

The city abounds in its early convict history, surrounded by the vast untamed wilderness that makes up much of Tasmania.

The city sits on the Derwent River and the harbour and with many of the original buildings having been restored, particularly around the original wharf area, it makes for a historically picturesque place.

The Wharf Docks are a good place to start to explore historical Hobart. Because less buildings through the years were torn down, the old world feel is magnificent and much more pronounced than in Sydney, despite Sydney being the older city of the two.

The Wharf area gets busy with fishing boats during the week and on the weekend, markets, locals out for a quiet drink and pleasure craft.

There are a number of museums, art galleries and attractions, including the Maritime Museum of Tasmania.

The ocean played an essential part of Tasmania history, making the Maritime Museum an essential stop for history buffs. Corner of Argyle and Davey Streets, Phone (03) 6234 1427.

Salamanca Place, a short walk from the docks is a great place to shop and has a lively weekend market and the Antartic Adventure, a museum that explores the history and present of the Antartic experience and Australia’s role.

Salamanca Place was were the whalers used to dock. The wharf buildings and storehouses have been converted into a collection of restaurants, cafés, art galleries and speciality shops while retaining its historical buildings.

Sarah Island - Found on south west corner of Macquarie Harbour, you can take cruises to this place of punishment from Strahan on the Gordon River, west coast of Tasmania. The convicts that were sent here were those who had reoffended upon their arrival in Australia. From 1822 to 1833, this place the reputation of hell on earth. The island is now part of a National Park, protected by World Heritage Status.

Port Arthur Historic Site - This place of tragedy is now a world class attraction for tourists. Now-a-days surrounded by gardens and native bushland, there are more than 30 buildings and ruins to explore. The visitors centre has interactive displays.

Tasman Peninsula Convict Trail - This trail allows you to explore where Tasmania’s convict history is most concentrated. It is hard to believe such tradegy could exist along the beautiful coast of the Tasman National Park. The Trail takes you to seven locations, including Eaglehawk Neck, the Coal Mines, Saltwater River and Wedge Bay.

The Female Factory, Hobart - hundreds of women and children were imprisoned here from 1828 to 1877. Many perished from the combination of poor hygiene, inadequate nutrition and backbreaking work.

Richmond - This historic town has preserved many of the buildings that were extant in the 1800’s, when convict labour was used extensively. The Richmond Gaol held many prisoners over time, including the Bushranger, Martin Cash. The town’s bridge, built by convict labour in 1823, is Australia’s oldest road bridge.

There are plenty of opportunities for exploring Australia’s harsh convict past. Port Arthur has been well preserved. Freycinet National Park, to the north east, is stunningly beautiful and pristine.

Bear in mind the island’s southerly position makes for very cold winters (June to August) during that time of year, hiking and camping is not simple nor easy options.