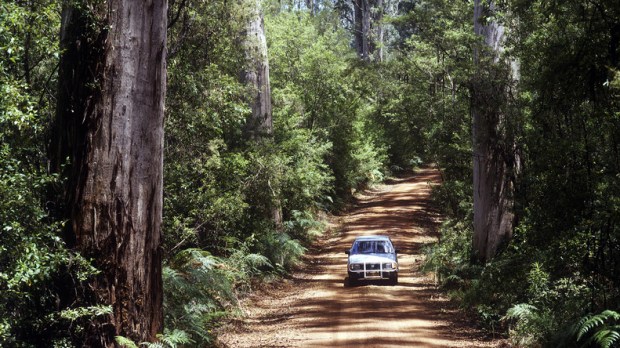 Travelling south from Perth to Margaret River, then to Albany offers a much varied landscape in a region known for its Mediterranean climate.

Margaret River, as many Australians already know, is a renowned Australian wine growing region and has the cuisine to match. There are many wineries here of growing fame, including those offering gourmet dining, tours and accommodation. Many of them offer tastings as well and have cellar door sales.

But Margaret River is also close to surfing beaches, some suitable for swimming as well. There are interesting limestone caves to explore, wildlife to spot, grand national parks are nearby:

Growing in this particular corner of the continent are the tall Karri and Red Tingle trees. Growing to heights of 90 metres, Warren, Walpole-Nornalup and Shannon National Parks have exceptional examples of them. At the Valley of the Giants at Walpole-Nornalup, you can take the Tree Top Walk or the Ancient Empire Walk for wonderful views of the bushland, wildlife and of course, the trees.

Pemberton, located 335kms south of Perth, is surrounded by The Gloucester, Warren and Beedelup national parks, with their tall trees of Karri up to a 1000 years old. As well, the many skilled local artisans make Pemberton well worth visiting.

Pemberton started as a timber town and still looks very much like one. You can ride the rail line that took the timber from the where it was harvested to the town’s mills.

Albany, settled in 1826, was the main port for the colony for many years until they dredged the harbour at Fremantle much later. There were whalers here, today, there are whale watching cruises.

There is also Whale World. Regarded as the largest museum dedicated to whales, this attraction at Cheyne Beach has extensive displays, exhibitions and a restored whaling ship from the 1800s.

Native fauna found in the region include western grey kangaroos, honey possums and fat tailed dunnarts as well as plenty of birdlife, including wedge-tailed eagles and red tailed tropicbirds.

Further afield, explore the coastline of Cape Leeuwin, where the Southern and Indian Oceans converge. Visit the historic Leeuwin Lighthouse, a lighthouse built in 1895 that can be toured with dramatic views at the top.

The Indian ocean, depending on its many moods, offers spectacular romantic sunsets and a temperate climate. Cape Naturaliste and Cape Leeuwin are both great for whale watching, especially during July.

Both Capes have wonderful parks to explore as well. The Leeuwin-Naturaliste National Park has natural formations such as the Canal Rocks and Sugarloaf Rocks, surf and swimming beaches, camping spots and great sunsets over the ocean.

You can walk above the trees: Tour the Valley of the Giants with a Tree Top Walk. You can also book surfing lessons, take a Margaret River wine tour or a whale watching cruise.

You can also canoe the river, before heading off to Albany with its spectacular rugged scenery of southern Australian coastline.

See more on Pearling at Broome.

There are hotels, resorts, motels and other accommodation suitable for most budgets in all the major centres. Motels and quaint bed and breakfasts, campsites as well as hostels are scattered on the main routes and further afield.