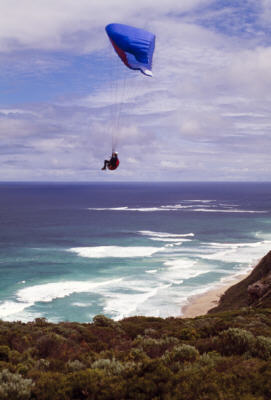 Paragliding on the Coast

Next: Visit the South West of WA

Stretching from Ceduna in South Australia westward towards Norseman in WA, the Nullarbor Plain covers some 200,000 square kms.

With the Gold Fields and vast deserts to the north and the Southern Ocean to the south, this red dust area has seen the rise and fall of many places dictated by gold finds. The area has just over 200mm of average rainfall a year.

The Eyre Highway, as this part of the Australia Highway 1 is called, has one stretch between Caiguna and Balladonia that travels in a straight line for 146.6 km. The highway is named after the leader of the European explorer party that first attempted and crossed the Nullarbor in 1841.

Eucla, only 11kms from the South Australia / Western Australia border was originally established to serve as a telegraphic repeater station in 1877, manually operated. This particular place was chosen for the simple reason that supplies could be landed here. To the east is the longest cliff face in the world, formed over millenia by the forces of nature, especially the wind and storms of the Southern Ocean.

The remains of the old Telegraph Station at Eucla evoke images of a past time, visitors love to photograph it. There are actually other old abandoned buildings here, covered and uncovered by sand dunes as the winds move the dunes over time.

There are magnificent views of the cliffs stretching towards the horizon at the Eucla National Park.

At the Thylacoleo Caves, numerous fossils of the mammals, birds and reptiles that lived here between 400,000-800,000 years ago have been found. 23 kangaroo species have been discovered so far in this cave system along with many other animals, having plunged 60 metres to their death accidently in the limestone sinkhole.

Over the many years massive waterfilled sinkholes and cave systems that have formed in the limestone rock over millenia. In fact, the Nullarbor Plain is formed over the largest single deposit of limestone in the world.

It was in this time period the ‘Megafauna’ of the Australian continent roamed. Some examples of this megafauna include wombats two metres high and a bird called the Demon Duck of Doom, with a weight of up to 250kg and a height of 2.5 metres. There were also, it is believed, seven metre long goannas, crocodiles that could apparently climb trees and huge flesh eating kangaroos.

Not the sort of thing you would want to meet in a dark alley somewhere.

Many of the places along the Eyre Highway at this point are roadhouses. Set up to cater for the many travellers going east or west, they supply things like water, fuel, food and other supplies. Some have accommodation. Cocklebiddy is one of them, as is Mundrabilla, Madura and Caiguna.

Not far from Cocklebiddy, is one of the largest cave systems in the world, the Cocklebiddy Caves. At Madura, the Madura Pass Lookout has some magnificent views of the surrounding countryside.

On the west extreme of the Nullarbor Plain is Norseman. This town stands on a goldfield and was named after the horse that first uncovered a gold nugget here. You can also try your hand at finding gold here, fossicking is allowed but you will need to obtain a license first, available from the Norseman Visitors Information Centre, located at 68 Roberts St, Phone +061 8 9039 1071.

There are hotels, resorts, motels and other accommodation suitable for most budgets in the major centres. At the roadhouses, there may be a motel or hotel. Quaint bed and breakfasts, caravan parks, campsites as well as backpacker hostels are scattered on the main routes further west.

In the North East of the state: Broome WA.

Previous: Visit Albany on the South Coast of WA