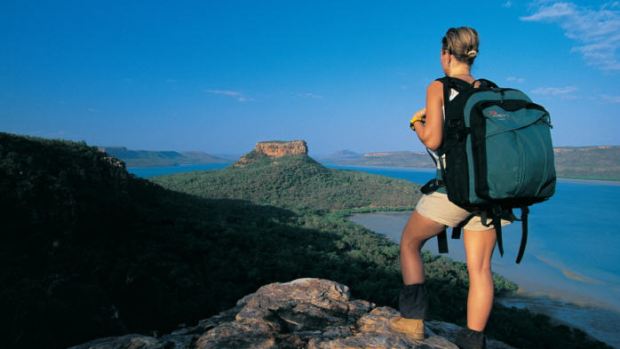 On the coast of the Top End is Broome, with Cable Beach - wonderful sunsets over the twenty two kilometres of white sand and crystal clear waters.

Many end up basing their exploration of the Top End of Western Australia here. Broome usually has balmy nights and warm days, but summers, December through February, can be hot.

Broome started off as a pearling centre, with many of the workers coming from Japan, the Phillipines and Malaysia. There is still pearling going on there, but the tourist industry has thrived here as the surrounding region has so much to offer in the way of outdoor adventure, abundant wildlife and spectacular scenery.

The remoteness of Broome, not only from the world but the rest of Australia has attraction for visitors. With its strong mix of residents from all over the world, both historically as a pearling centre but now as a tourist mecca and one of the top destinations in Australia, has resulted in a remote frontier. yet multicultural. town.

There is a delightful mix of buildings reflecting its history, while the town’s diverse multicultural roots have enhanced the quality, choice and mix of the local cuisine.

Fresh seafood, as well as the local produce mixed with the many spices of India and Asia make for memorable dining.

Starting off as the commercial centre for Broome, Chinatown now has a grand collection of pearl showrooms, showing some of the world’s finest pearls. You can also good places to eat, as you would in a Chinatown, with fine restaurants to cafés and other eateries.

If you wish to shop for pearls, Broome, logically, is an excellent place to be. Set in Western Australia gold or in a necklace, the pearls can come in an almost bewildering array of colours and sizes.

Broome Surrounds: From here you can explore the Top End of Australia in all its splendour. Take a hovercraft to watch the sunset, ride a camel through the town and off to Cable Beach, or take a scenic flight over the vast wilderness areas.

Cable Beach has safe swimming, the white sands stretch for 22kms. A popular place to gather for romantic sunsets over the ocean.

Check with local authorities before swimming in estuaries, rivers and waterholes. Salt Water Crocs and Freshwater Johnsons like living in them, some can be very hungry after a day’s trashing about. Jokes aside, if unposted, get advice and heed signs seriously.

With vast untamed, rugged and very beautiful natural regions to explore, what attracts those with a sense of adventure can also be dangerous, always seek reliable local advice before driving through the remote parts.

Kids and the Family

Kids of all ages and the family will find plenty to do. Besides the multitude of water activities, cycling, boating, fishing and bushwalking just to name a few, there are dinosaur tracks to be seen at the Gantheaume Point at low tide. If not lowtide, you can see casts of the footprints at the top of the cliff.

Another memorable place to visit would be to take the kids to the Malcolm Douglas Crocodile Park at feeding time. That’s not a threat, kids.

Take a tour exploring the beautiful Windjana Gorge, Tunnel Creek and Geikie Gorge, where its possible to see the descendants of dinosaurs, crocodiles, in their natural habitat as well as the birdlife. There is a 4WD tour to Cape Leveque and Aboriginal communities.

At Geikie Gorge there is a great Aboriginal Heritage Adventure or go to Willie Creek Farm to see the pearling industry as it is today. Do try to get a visit in to the Aquaculture Discovery Centre or the Broome Crocodile Park before leaving.

The Staircase to the Moon is a place to see the effects of water on the Moon’s reflection. Birdwatchers will also appreciate the many species found here, some from far away as Siberia.

Broome has charming seaside lodges, inns and hotels to suit most budgets as well as world class luxury resorts. There are also caravan parks and camping available in many of the Kimberley National Parks.

Weather Today and Forecasts for Broome

About the weather in Broome and forecasts: Broome Weather Western Australia.

You can get more tourist infomation about Broome from the Broome Visitors Centre, located at the corner of the Broome Highway and Bagot Rd. Phone +061 8 9192 2222.

See more about the Kimberley in Western Australia - Tourist Info.

The South West of WA and Perth are great to visit any time of year, with delicious cuisine, wonderful beaches, rugged coastline, towering forests and whale watching delights.

Thought about working in Australia? - Find out more about Australian Jobs - Employment.