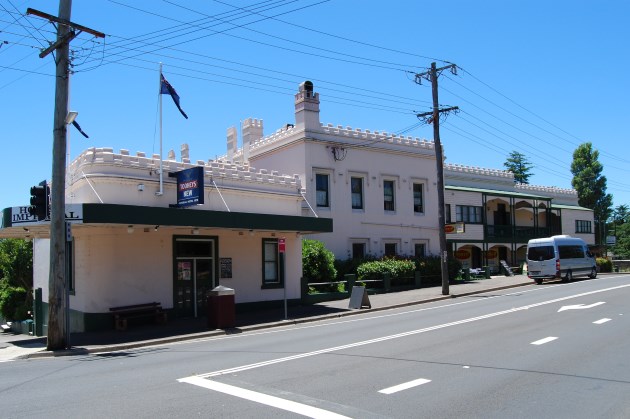 Imperial Hotel in Mt Victoria NSW, open since circa 1878.

On the western edge of the Blue Mountains Plateau, Mount Victoria is the town on the Great Western Highway (A32) with the highest altitude. Nearby lookouts allow you to take in the scenery of mountains, valleys and the distant fertile regions of Central NSW, west of the Great Dividing Range.

Found at the end of the Blue Mountains Train Line, you can take the train from Sydney Central to get here:

Within this charming mountain village you will find a number of historical buildings, which only add to the charm of this place. The Imperial Hotel (1878), St Peter’s Church, Manor House, built by Fairfax family in 1876 as well as the Toll Keepers Cottage, built in 1849.

Nearby Mount Piddington, just south of Mt. Victoria, is next to One Tree Hill which has an altitude of 1111 metres. From both places, there are views of the fertile Kanimbla Valley. On the slopes of Piddington is Coxs Leap and Bushranger Cave.

This Imperial Hotel has been open for more than 130 years, situated strategically on the road that first crossed the Blue Mountains.

The Blue Mountains, just west of Sydney, is a great place to explore for Australian history, antique shopping, spectacular views and long or short walks in the bush.