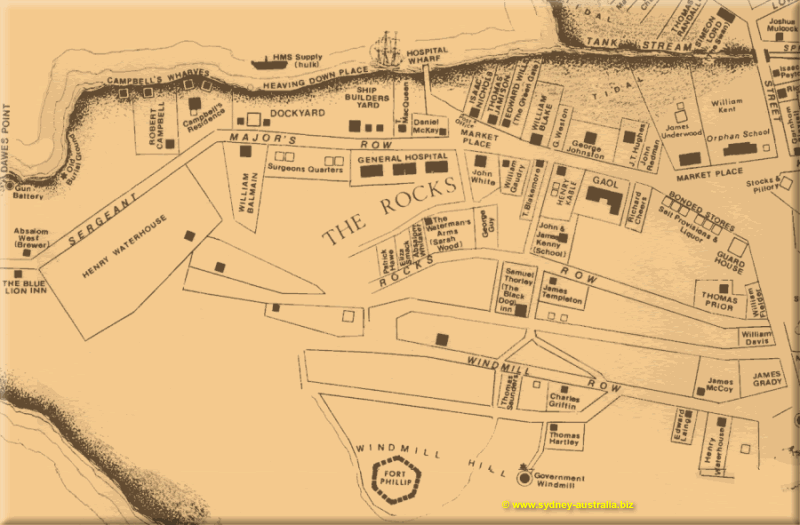 Next: Places to Eat at The Rocks

Map of Attractions at The Rocks

The map shows The Rocks, a restored historical district and a popular place to visit for the many visitors to Sydney Australia.

The name of the district was given for the rocky outcrops were the convicts were first settled in 1788, in little more than hovels made of branches and leaves.

Long occupied by Aboriginals, the First Fleet European arrivals chose this place as it was fed by a fresh water stream (the Tank Stream) as well as a protected harbour for the prisoner and supply ships to unload.

As the map shows, the area quickly developed, with ship builders and repair dockyard, a hospital, a prison, Campbell’s wharves and storehouses, a gaol (jail) and an Orphan School.

Somewhat disturbingly, the Stocks and Pillory were located just across the Market Place from the school. Luckily, they no longer exist as prisoner reform policies have moved on somewhat since then.

Perhaps they were there to serve as a warning to the young orphans (as well as everyone else). A stock is where the prisoner was able to sit with their ankles and feet locked in place, while a pillory would have locked a person’s head and hands in place.

This was all done in full view of everyone, presumably for the benefit of the public. Oh, the humiliation!

Even then, there were a number of inns, such as the Blue Lion Inn, the Waterman’s Arms and the Black Dog Inn. There was also a brewery owned by Absalom West.

The place was popular with sailors out for a good time, by the 1840s the place had a bad reputation as criminals and poorer people needing cheap places to stay lived there. This did not change much till after the 1930s. Now property values have soared, being in close proximity to the city and harbour.

Windmill Hill still offers great views, which is why Fort Phillip was placed there. The windmills, for milling flour, were reduced to one by the time this map was made. The windmill features prominently in oil paintings made around this time.

On the other side of the cove, Dawes Point became the site where the Sydney Harbour Bridge would be built in the 1930s, during the Depression Years.

The hulk of the HMS Supply lies on its side in Sydney Cove on this map. This ship was the original supply ship for the First Fleet.

Today, The Rocks is still a very lively place, with regular Markets and great places to shop in the restored warehouses and buildings. You can find some of Sydney’s best restaurants here too, as well as places to enjoy a drink and music.

The windy streets are still here today, as seen on the map, yet they dont have horses and carriages, but have been made into pedestrian malls that preserve the character of the place. You will enjoy visiting here.

There are numerous places to visit here: See The Rocks Attractions.

Sydney Information Centre on the Corner of Argyle and Playfair streets offering visitors not only information, they have a good collection of artefacts and other items on display from earlier Sydney (see the location on the The Rocks Map of Attractions).

More of Sydney Attractions and Places to Visit

Previous: Entertainment, Food and Drinks at The Rocks