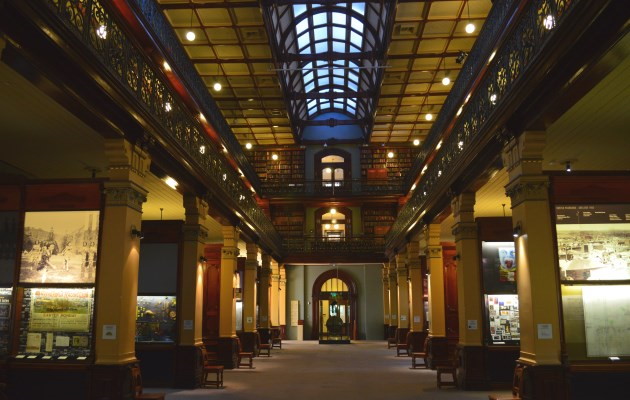 Next: The Institute, Adelaide

No. 37 on the Adelaide City Map: Places to Visit.

One of the historical landmark buildings of Adelaide is the State Library. Located on the corner of North Terrace and Kintone Ave, next to the South Australian Museum, its history began in London in 1834 with a donation of books from Robert Gouger.

Now a complex of wings, starting with the original Mortlock Wing, there is everything with books, historical records, a digital library, computers, a photo and art gallery and everything associated with a modern library.

Although it initially started with some difficulties, the library quickly grew in importance in the fledgling colony. It first occupied a small wood building that had been used as a schoolroom, opposite Holy Trinity Church in the Parklands. The ground is now occupied by the Adelaide City Suburban Train Station (No 8 on the map) .

In 1884, the first stone building was opened on the present site. Now called the Mortlock Wing (see photo) it is of Romanesque style design, with the original grand chamber interior design of wood with a mansard roof.

The original wrought iron balustrading still line its second and third floors and covered with a glass-domed lantern roof, allowing the daylight to light the interior. A clock, made by Dent and Sons (London) was purchased for the then princely sum of fifty pounds and installed in 1887. Being extremely accurate, it is still in use today.

There is no equal to this unique and interesting design in Australia and well worth a visit on its own.

There are tours available of the library held at regular times. While there, visit the art and photo gallery.

Previous: Parks and Squares of Adelaide