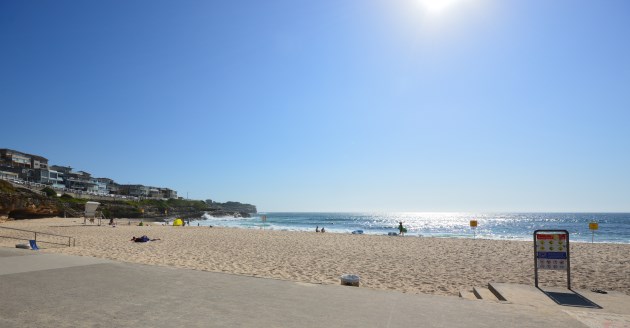 A view of the Beach at Bronte, Sydney East

Smaller than Bondi, Bronte is nonetheless appealing, with its soft yellow / white sands. The beach is seen by Sydneysiders as a pleasant choice when wanting to get away from the other, more busier beaches, found on the city’s east coast.

There is also a life saving club there, so on patrolled days you can enjoy safe swimming between the flags.

The delightful park adjoining the beach has not only picnic facilities, but gas BBQ’s, great for a family day out at the beach. There is also a café serving coffee and light meals.

There is a small creek that runs through the park, feeding the trees and bushland that is now Bronte Park. Created in 1887, the park now is still as popular as ever with the locals and visitors.

At the beach, there is a rock pool for swimmers. Bronte is also popular with SCUBA divers and surfers.

Starting at the end of Bronte Beach and extending all the way to the Coogee rock baths, and up to 100 yards from the shore is the Bronte-Coogee Aquatic Reserve.

Popular activities here besides scuba include snorkelling, boating and fishing. There are limits to fishing here, for example, you cannot fish for blue groper.

Bronte Beach is located just south of Bondi and Tamarama Beach, while further south from here is Coogee Beach.

Buses that run on a regular basis to Bronte Beach includes route 378, which takes you from Sydney Central Station to Bondi Junction, along the coastal road ending up at Bronte Beach.

An alternative route would be to take a train to Bondi Junction Train Station, from where you can catch the 440 Rozelle to Bronte bus service. In fact, you can walk from there to the beach, the walk takes about ten minutes.

Other Sydney South beaches, from north to south include:

Size of the Waves

On particular days the surf can get big, with cross-currents and rips. Only strong swimmers should venture out, but between the flags. Board riders, boogie board riders, canoes, outriggers can usually find a good spot to take advantage of the larger surf waves.