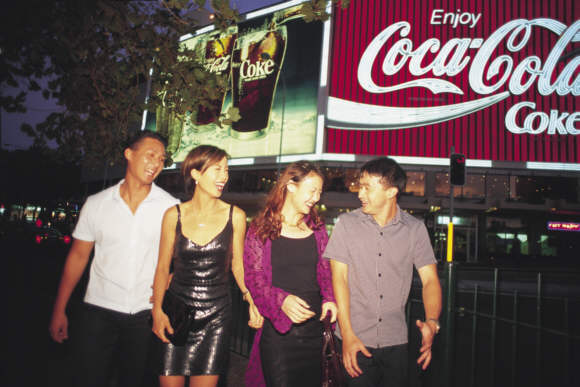 Lively at night, with fine dining, bars and clubs. You will find plenty of places to eat 24/7, from breakfast to late night and with lots of shopping opportunities during the day. Kings Cross Train Station makes for easy access to the City and Bondi Junction.

Commonly referred to by Sydneysiders as “The Cross” the area has had a somewhat chequered reputation in the past as Sydney’s red light district, but today, it has a lot more than that and continues to attract the many visitors to the area day or night.

With that in mind, there is also Harry’s Cafe de Wheels, long known to Sydneysiders for delicious pies. Nearby Darlinghurst also has a good collection of restaurants and places to eat. More about Darlinghurst Sydney. 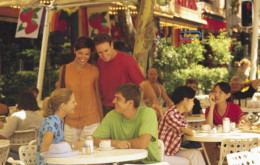 Plenty of Restaurants
to choose from

The night sees revellers traversing the streets to the many nightclubs, strip bars and assorted eateries, video arcades and multitudes of entertainment.

Sip cocktails in the newer trendy bars or drink your share of beer in the many upbeat pubs and bars. Dance the night away.

Red Light District: Still, the Cross late at night can be hardcore. There are plenty of venues that are quite upmarket but some where you would be brave to enter and you would need to keep your wits about you.

Elizabeth Bay House, built between 1835 and 1839 was described then as the finest house in the colony. The gardens surrounding the house allow wonderful views of Sydney harbour.

Nearby Paddington, a chic suburb with leafy, winding streets is known for its many beautiful terrace homes and small art galleries - see more about Paddington Sydney.

The Sydney Jewish Museum provides visitors with experiences and understanding of the events of the Holocaust by allowing them to meet, in a dignified and moving environment, those who were involved. Located at 148 Darlinghurst Rd, Darlinghurst.

The museum also deals with Australian Jewish life from the first days of European settlement in Australia to the present.

On the corner of Macleay Street and Darlinhurst Road you will find the El Alamein Fountain, built to commerate the efforts of the Australian soldiers who fought in North Africa during World War II.

Sydney Weather for Today and Forecasts.