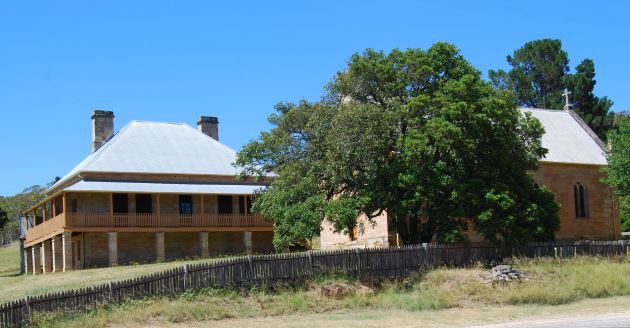 Historical Hartley Village in the Surrounds of Lithgow.

Next: Mountain Peaks of the Blue Mountains

Lithgow and its surrounds were an important development in the early history of the colony of New South Wales. Located at an altitude of 900 metres it marks the western side of the Blue Mountains, the area was the first to be opened to the European settlers in the Central West.

When the railway line from Sydney was completed in 1869, trains were able to begin the region’s prosperity with farming and coal. Not much later, the first foundry for the manufacture of iron was established and in the early 1900s, the beginnings of Australia’s steel industry.

With the railway’s evergrowing demand for coal and steel, the region soon developed an industrial base for the manufacture of all kinds of things.

In the surrounds of Lithgow, there are national parks to explore, Hartley Historic Village, heritage homes, art galleries and museums. There are also walks that take you past much of the history.

The Blue Mountains World Heritage Listed Area, with over 1 million hectares under protection, is within easy reach of Lithgow, including the National Parks of the Blue Mountains, Gardens of Stone, Jenolan Caves, Kanangra-Boyd, Nattai, Yengo, Thirlmere Lakes and Wollemi.

Thirlmere Lakes National Park, declared in 1972, encapsulated some of the oldest lakes in the world. The five lakes here are popular for canoeing, as is bird-watching, swimming and picnicking.

Nattai is good for bushwalking as there is only limited access for vehicles. Most of the park is declared wilderness, with sandstone cliffs and plateaus on the 50,000 protected hectares. Note: There is a three km. exclusion zone around the water storage area of Warragamba Dam.

Some of the world’s cave systems in the world, the Jenolan Caves are remarkable for their pristine beauty. There are numerous tours of this labyrinth of caves available on a daily basis.

More about the Blue Mountains NSW.

Accommodation in the Blue Mountains