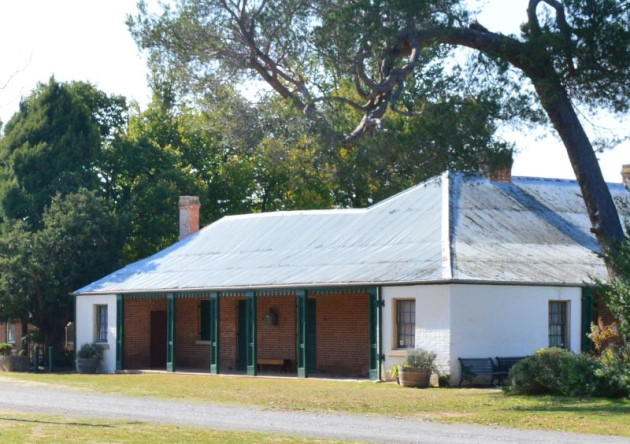 Riversdale, Home to the Twynam Family for many Years

This National Trust protected home was originally built as a wayside inn for the hungry and thirsty coach travellers that came through this countryside. Originally built about 1840 by John Richards, it was later bought by Edward Twynam, who had served as the NSW Surveyor General.

It became the Twynam family home for almost a hundred years, after being purchased in 1872. Sold to the National Trust in 1995, it is now protected.

The first people to operate Riversdale as an inn were Louis Levy and Benjamin Gould. Mr. Gould featured in a Sydney Morning Herald newspaper article in 1842, which voiced his concerns about the stability of the nearby bridge that crossed Wollondilly River. Not much later, he had to help rescue coach passengers when the coaches’ horses fell through the bridge. It illustrates the dangers inherent in travel in those days.

In the early 1850s it operated as a boarding school for boys by David Patterson. About six years later, it once again became an inn, called the Criterion Hotel till the property was sold in about 1860.

There is a fine collection of Georgian colonial furniture here. There is also a collection of wood carvings created by Emily Twynam, as well as sketches.

Another attraction here are the original gardens and paddocks, now replete with picnic grounds. It can be used as a venue for weddings, enquire for details.

Located near Wollondilly River in the northeast of Goulburn:

Visit: Monday, Tuesday and Thursday 10am to 2pm
Sunday 10am to 3pm
Group Bookings Welcome.

Places to Visit in the Surrounds of Goulburn

Previous: On the Monaro Highway NSW