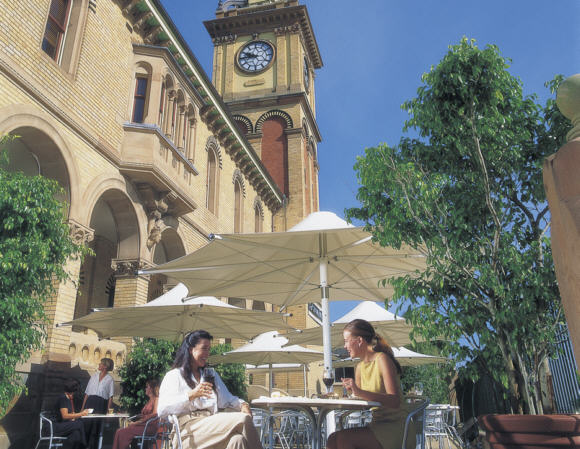 Next: Singleton in the Hunter Valley

Named after the port city in England on the Tyne, Newcastle has played been an important role in the development of New South Wales as an exporter since the 1800s. Situated by the Hunter river on the NSW Coast, the city exported everything such as coal from the Hunter Valley region to wines and wool.

Still an important port for NSW, the old wharf waterfront precinct has been regenerated into a trendy upmarket gathering place with restaurants, bars and entertainment at night and a cafe’ lifestyle during the day.

Newcastle is a good place to base yourself for exploring not only the Hunter Valley wine growing region, but also gives you a chance to explore its many beaches, beautiful countryside, bargain shopping and local history, including its convict beginnings.

Darby Street - Offers art and craft galleries, designer shops, some great eateries and restaurants. Nearby Cooks Hill has a number of private art galleries where you can talk to local artists.

Hamilton, with Beaumont Street at its center, has its roots in the Mediterranean since most of its early settlers came from Italy and Greece. A good collection of restaurants, pubs and delicatessens as well as cafe’s.

The Convict Lumberyard and Stockade - Newcastle began as a place of punishment for convicts sent from Britain that had committed offences while in Australia. Now a National Heritage Site, it shows the history and beginnings of Newcastle as a convict penal settlement.

Stockton, a nearby sleepy coastal village is a short distance away from Shipwreck Walk. The ferry trip to Stockton also allows you some great views of the working harbour.

Fort Scratchley, built on the entrance to Newcastle Harbour on a hill, served to protect the port and city since the late 1800s. Closed at the moment for refurbishment, the site is scheduled for re-opening early 2008.

Newcastle with its active fishing fleet provide the freshest of seafoods. Sample some at the Seafood Cooperative by the marina, or try one the many restaurants along the waterfront. Beaumont Street in Hamilton is another good place for some pleasureble restaurant dining.

The map shows National Parks, towns and places of interest in the Newcastle Hunter Region.

This map shows Newcastle in relation to the NSW North Coast - See Map of the Mid North Coast NSW.

Near Newcastle in the Hunter Valley: Cessnock NSW. 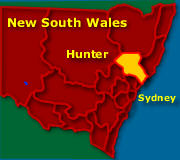