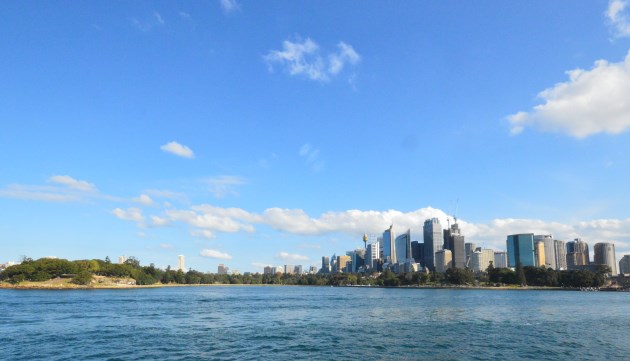 Sydney with the Royal Botanic Gardens in the foreground of the city. (Photo taken on the ferry to Manly)

Sydney is virtually surrounded by national parks. In fact, in the center of Sydney is the ever beautiful harbour situated on the foreshores and islands, forming its own national park.

On the borders of Sydney: on the north by Ku-ring-gai National Park and to the south by the Royal National Park, while to the west is the World Heritage-listed Blue Mountains, located some 90 minutes from the city.

The city also has a green heart, providing magnificent views of the harbour, such as the Royal Botanic Gardens, the Sydney Harbour Islands and the meandering waterways that split the city into north and south.

Established in 1816, the Royal Botanic Garden Sydney is one of the oldest botanic gardens in the Southern Hemisphere and next to the Sydney Opera House:

Hyde Park, Centennial Park Sydney and the Sydney Harbour National Park are all very much part of Sydney’s history, and will continue presumably so forevermore.

See the map showing location of Parks in Sydney Central:

Sydney Harbour National Park contains various islands in the harbour and the foreshore areas. You can find pockets of protected bushland which once covered the whole of the Sydney region as well a diverse range of native animals that still inhabit the park.

The latest New South Wales addition to the World Heritage Listing is the Sydney Opera House itself.

You can take tours of historic Fort Denison and Goat Island. You can book tours to these Sydney Harbour islands at the historic Cadmans Cottage, located at The Rocks near Circular Quay.

They also have information and tours about Middle Head and Bradleys Head, also the old Bare Island Fort (used as a set backdrop for a number of movies, including the filming of Mission Impossible). Phone the Information Centre at +061 2 9247 5033.

Kuring-gai Chase National Park is about 24km north of the city with magnificent sandstone cliffs, eucalypt forests and rainforests overlooking the blue water expanse of Pittwater.

Bobbin Head in the Kuring-gai Chase National Park has beautiful waterways, with plenty of walking tracks to explore and picnic areas. West Head has fantastic views of the many waterways heading out to the ocean.

At Bobbin Head and Akuna Bay there are marinas

Royal National Park, about 35 km south of the city is thickly forested with heathland and wildflowers. There are some wonderful secluded beaches there as well if your prepared to explore further afield on foot.

Historically, the Royal National Park became the first national park in Australia and the second in the world, after Yellowstone National Park in the USA.

Both parks have excellent systems of graded walking trails, stunning scenic lookouts and picnic spots. Ku-ring-gai Chase National Park has rock engravings, hand stencils and other Aboriginal sites along the Resolute Track while the Royal has both boating and canoeing options.

The Greater Blue Mountains region is about one and a half hours’ drive from the Sydney CBD (Central Business District). The million hectares of forest on a sandstone plateau afford natural high protection from development and erosion. The eucalypt vegetation here alone represents 13% of the global total.

Spectacular clifftop trails and bushwalks are a good way to enjoy the beauty of the region, but for those of an adventurous type, there are plenty of thrills to experience here too - abseiling, white water rafting, canyoning and horse-riding, to name a few.

Although this park is small, it played an important part in the history of Sydney. It now holds a number of significant Australian artefacts:

Something different and great for the kids in the family: