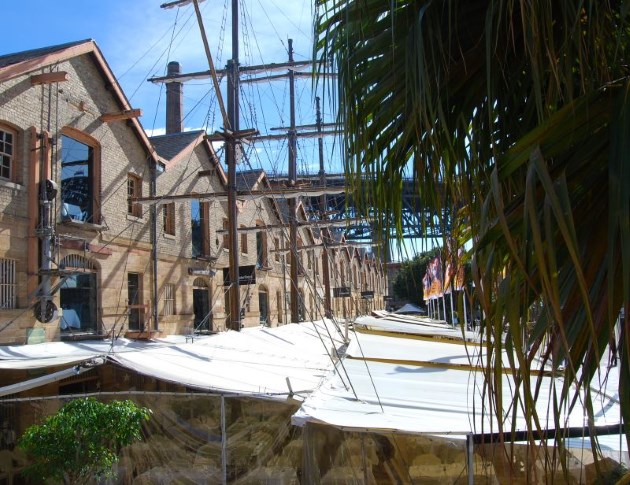 Places to Eat and Dining in a Historical Setting

Map of Attractions at The Rocks

Hunting for a special place in the historical district along cobble stone streets in the ‘old world’ place won’t take long. There are ones with great views of the Sydney Harbour and the Sydney Opera House, there are others tucked away in the old winding streets and alleyways.

There are also bars, pubs and clubs. You can dance all night at the Argyle or enjoy a drink at the waterside Cruise Bar.

Award winning Japanese seafood restaurant, with the freshest of sashimi, many made with a new twist on traditional cuisine.

The Cut Bar and Grill

Tasty juicy steaks and slow cooked prime rib a signatory dish. They also do a fine selection of seafood for entrees and mains:

The Cut Bar and Grill

Fish at the Rocks

Fish at the Rocks

No review of restaurants at the The Rocks should be without mentioning Peter Doyle’s fine dining seafood restaurant with its stunning views of the Opera House and the harbour. Ships, ferries and boats come and go here, but Doyle’s had been here for many years. With the upgrade of the Overseas Passenger Terminal it has regretfully closed after 27 years. In fact, the Doyle’s family have been serving seafood to Sydneysiders since 1885. However, you can still try their seafood at Watson’s Bay, an interesting ferry ride away from Circular Quay.

More Places to Eat at The Rocks

Entertainment, Food and Drinks at The Rocks

More Places to Eat at the Rocks

Sydney Information Centre on the Corner of Argyle and Playfair streets offering visitors not only information, they have a good collection of artefacts and other items on display from earlier Sydney. Find the location on the:

The Rocks Map of Attractions

There are great places to eat in Parramatta. Take a fast ferry scenic ride from Circular Quay in the city, a free Loop Bus connects there that will take you to all the places worth visiting there. They include the Phillip St. restaurants, Parramatta Train Station, Parramatta Westfields, Parramatta Stadium, the Leagues and RSL clubs, and of course, the Church Street restaurants.

Previous: Places to Eat at The Rocks