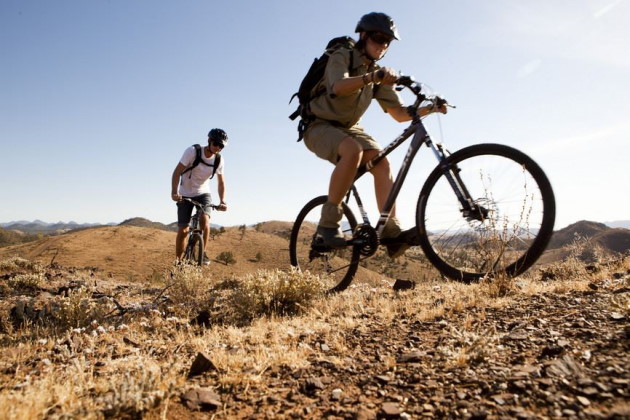 Next: Water Sports: Snorkelling and SCUBA

With cycling in Australia increasing in popularity, not only in the city but for long-distances and in the mountains, deserts and along the coast, visitors are also finding the places to ride during their vacations here. Our long stretches of flat roads, often relatively empty, have made long distance cycling trips popular not only with local riders but those from overseas.

Bring your own bicycles, however, check with the airlines what their policies are regarding bikes. You can also hire them.

Note however, some state government are taking harsher, some say draconian, attitudes when it comes to bicycle riding safety. Some newspaper reports are saying they are just revenue raising attempts, but heavy fines are in place for those not having bike riding helmets, for example.

Check the what the policies are regarding them if your also planning to take them on buses and trains. Attitudes are more liberal when the bikes are foldable and in carrying backs, not exceeding certain dimensions.

In New South Wales, for example, if you have an Opal card, you can take your bicycle for free on intercity and city trains. That being said, you may wish to avoid rush hour trains in Sydney. There are other conditions and limitations, see:

Train Travelling with Bikes in NSW

In Queensland, city trains do not allow bicycles during the hours of 7:00am - 9:30am and 3:00pm - 6:30pm going to the city centre (CBD) in the morning hours and away from the city centre in the afternoon. If you have a folding bicycle, you can travel at any time. See more about the conditions:

Travelling with Your Bike

Victoria is taking the whole process further by providing bicycle racks on buses on certain routes. They have also installed lockable bike racks at train stations, there are even bike cages that you can use at other major transport interchanges:

Different again, South Australia has its own rules regarding bicycles on buses and trams. See:

With everything from special places around Australia dedicated to mountain biking, there are an increasing number of mountain biking trails being opened up in national parks and reserves, even on certain fire trails that traverse much of the wilder natural areas.

Not all trails are open at all times, as well, bikers are expected to respect the surrounds as well as the trails and other users. Fire trails exist for a reason, it is important to note the weather and any seasonal bush (forest to desert areas) fire warnings.

Lights are neccesary if your travelling the Outback on the main remote roads. Be sure truck drivers and cars can see you ahead of time, with lights and reflective clothing.

Travel insurance is well worth considering, in remote places and parks, be sure to seek quality local advice before proceeding. Tourist information offices are a good place to start, as are the state Parks and Wildlife information offices.

You can also find tour operators that offer tour rides for different fitness levels and skills.

That being said, mountain biking is a fun Australia adventure. On your bike, then!

For the latest news and events for mountain biking in Australia, see the Mountain Bike Australia.

An excellent source of information for mountain biking in New South Wales is the NSWMTB. They have a good section on the many places to ride in the state.

Darwin has the Darwin Off-Road Cyclists (yes, it is DORC), a club that supports mountain bikers and the sport. There are plenty of places to go as well as events. Check them out at: DORC.

Alice Springs has the Alice Springs Mountain Bike Trails, sponsored by the NT Parks and Wildlife Commission. Starting at the historic Telegraph Station, they are interlinked and marked along the way.

In Queensland, a ton of information can be found at QLD Mountain Bike. Quality info about places to bike, events and races in this sunshine state.

SA has lots of trails, including a 900 km. ride that and those exploring the Flinders Ranges. Useful resource for mountain biking in SA: Bike SA. Also a good info source for Adelaide trails. They also have maps!

SA also has the South Australian Mountain Bike Association (SAMBA) SAMBA with support for trails and resources. At the time of writing, their site was still under construction.

This state has wonderful rides, from the gentle along quiet country roads to challenging courses. The West Coast has a a three-week cycling that is rated as one of the best in the world, particularly for its scenery.

Another, the Tasmanian Trail, crosses the state. This 480 km. ride starts in Devonport in the north and ends up in Dover, in the south east of the island.

Near Hobart, there are at least thirty tracks to keep you busy, all very scenic. A good resource for finding trails in the surrounds: Greater Hobart Trails.