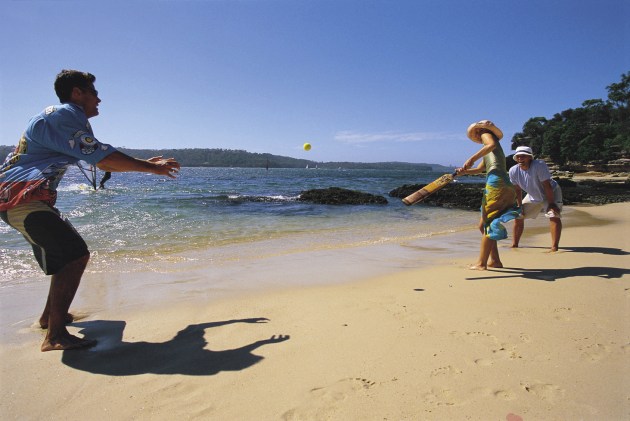 Combining beach with a cricket bat and a tennis ball

Next: Adventure in Australia

Want to play golf? Swim? Watch cricket or football? It is safe to say Sydneysiders and other Australians love their sports, both on a team and individual level. Some are even said to worship it but without the robes and distinctive hats.

It is interesting that while many parks in Sydney seem almost deserted during the day on a weekday, but filled with activity and team sports for every age group on weekends and evenings.

Sydney beaches of course have plenty of land and water activities for you to enjoy. You can find surf lessons, go rollerblading along the beachfront at Bondi and Manly, play beach volleyball and horse & bicycle riding in Centennial Park. Bungee jumping, even climb Sydney Harbour Bridge,.

Sydney has some excellent courses, some pricey, others not. When you go to one to play golf, you are not only allowed to play the links but invited to enjoy their club facilities as well.

Many of the outer suburbs have golf courses, particularly towards the south and east of the city. some with spectacular scenery and are usually easy enough to find.

Located close to city central there are two pools with easy access. North Sydney Olympic Pool, located just across the Sydney Harbour Bridge at Milson’s Point, is another.

Most of the Sydney beaches also have salt water rock pools, great for young families as they are usually protected from the wiles of the ocean.

Where to fish, what to fish and when:

There are plenty of Tennis courts in Sydney. They usually have night lighting as well, so you are not limited to daylight hours.

For those keen to watch, The New South Wales Tennis Open is played at White City, Rushcutters Bay.

Lawn Bowls, once regarded as a genteel sporting activity for older adults, is now facing a tide of young upcoming stars (upstarts?) keen to bowl. Bowling Clubs have earned a reputation for being friendly to visitors and is not only true of Sydney lawn bowls clubs but throughout Australia.

Most have bistros for light or hearty meals as well as bar facilities and other amenities.

Sydney, being a harbour city, has plenty of places to go boating, with coves and bays to explore. Sail boats and motor craft are available for hire, allowing you spectacular views of the city.

You need a license in NSW to use any mechanically driven craft capable of more than 10 knots. There are a number of Sydney sailing schools for those to keen to learn.

You can even go cruising Sydney Harbour on a luxury yacht, complete with crew and chef, though I don’t know if that really would qualify as a sport.

Favourite destinations, Bondi Beach and Manly Beach both have plenty to do aside from lazing in the sun and paddling around in the water. Rollerblading, surf lessons, beach volleyball and just about everything else associated with a beach lifestyle can be found at these two beaches, with the rest of the Sydney beaches having one or more.

As for surfing, there are plenty of surf breaks up and down the Sydney coast, you would be hard pressed to find someone who has surfed them all.

Further afield from Sydney, you can find plenty of chances for horse riding in the Blue Mountains, Hunter and Hawkesbury, as well as the coast regions of Illawarra and the Central Coast.

In the city, you can go horse riding in Centennial Park, located east from the city on the way to Bondi. Camden, just 60km south west, also has horse riding.

Football season in Australia is regarded as being March to October, Cricket in October to March, Baseball October to February, with Basketball in April to October.