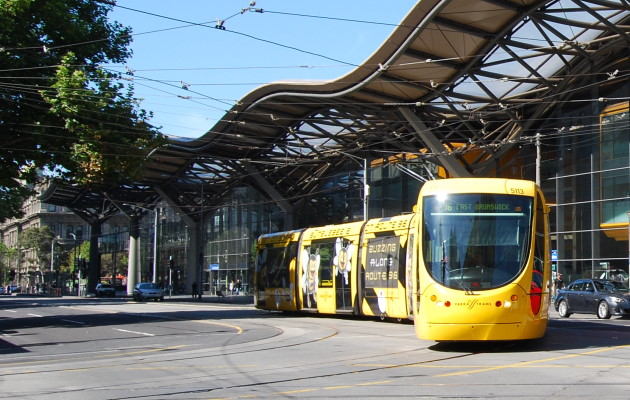 Next: Melbourne City - CBD Attractions, Shopping and Places to Visit

Transport Tickets allowing travel with all train, tram and bus services can be purchased at vending machines found at train stations and on trams and buses.

They are also available for pre-purchase at newsagents and other speciality outlets for Metlink, such as the Metro Shop and other outlets throughout the city.

The centre of Melbourne’s train system is Flinders Street Station. You can take trains underground around the city central business district to the other city train stations, including Melbourne Central on La Trobe and Swanson Streets and Flagstaff Station.

Melbourne map of train stations. Getting around Melbourne is easy with its extensive network of trains, buses and trams. Showing location of Melbourne City Train Stations: see the Melbourne Train Stations Map.

Train services link up to bus and tram routes so you can make your way to most places in Melbourne a short walk from a train, tram or bus. Services run regularly from five in the morning until midnight.

You will also find taxi stands outside many train stations. Spencer Street Station is the main city station from which you can take trains to other parts of Victoria.

You can ride the burgundy and gold Melbourne City Circle Tram for free, a tour circuit ride around the city central business district (cbd).

The tram takes you past major attractions, shopping malls and arcades in and around the city, it helps you also make connections with other public transport routes.

Other tram routes extend out into the suburbs. In fact, the Melbourne tram system is the fourth largest in the world.

Note: If driving in Melbourne, cars must always stop behind a tram when it is stationary and the doors are open to give way to the passengers getting on or off. Still you need to keep an eye out for traffic when getting on or off trams for safety’s sake.

Trams run in both directions on the dual carriage system every 10 minutes from 10am-6pm daily (except Christmas Day and Good Friday). During daylight saving times in summer, hours are extended to 9pm.

Along the routes there are tram stops, marked with signs. You can signal trams going your direction with a point of the arm to let the driver know you wish to catch the tram. When it stops, just keep an eye out for traffic and hop aboard.

Once aboard, you can purchase a ticket from the machine - you will need loose change as they do not accept bills. Like the trains and buses, you can get even cheaper tickets when you buy them from places like Post Offices, 7-11s and News Agents.

There are plenty of other Melbourne tours available, both for the city, Melbourne surrounds, including cruises on the Yarra River, making it even easier to tour the city centre and beyond. Notable Melbourne Places to Visit include the Docklands, St. Kilda, Brighton and Southbank.

South Yarra has great shopping and the Fashion Precinct. There are numerous Melbourne shopping tours available that can take you to all these places as well, depending on your tastes and what kind of bargain.

Melbourne Tullamarine Airport is about 20 minutes from the city or at peak times, add another 30 minutes. The most direct route to the Airport is via Tullamarine Freeway, part of City Link.

Part of this trip takes in the City Link road network and an electronic tolling system. There are no tollbooths to slow down the flow of traffic. A day pass needs to be purchased before using the City Link network, or by 12:00 noon the following day.

This fee is computed as part of the fare when using a taxi or airport bus.

About things to do in Melbourne for kids see Melbourne Kids Activities.