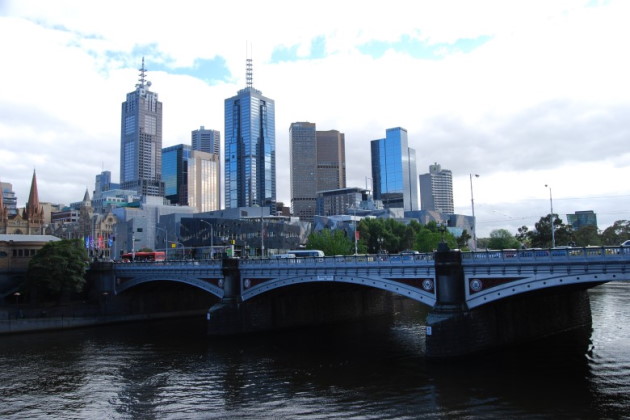 The Yarra River flows through Melbourne CBD and has been developed through the years into a gathering place for people to enjoy. On both sides of the river there are easy walkways and bicycle paths, eye catching bridges, sculptures, historical plaques with information.

There are a number of Melbourne Attractions either alongside the river such as Federation Square (seen in the Photo) or a short walk away. These include places such as the Melbourne Botanic Gardens, the Arts Precinct, the Melbourne Aquarium and the Crown Casino Complex.

Meeting Place - On weekends and week days, there’s always something happening here at Federation Square. Markets, entertainment including dance, comedy and music or shows, community festivals or even major sporting events on the big screen.

The Princes Bridge in the photo is the third bridge built on this spot, the first in 1844 from wood, the next in 1850, being the longest single span bridge in the world and made from sandstone. This bridge was given the Princes name, so named after Edward, Prince of Wales at the time.

The discovery of Gold in Victoria made the bridge too small for the massive jump in traffic for both sides of the river. A new, larger bridge was planned and begun in 1886, finished in 1888. See more about the Princes Bridge in the Melbourne Australia Places section.

Previous: Suburbs of Melbourne to Visit