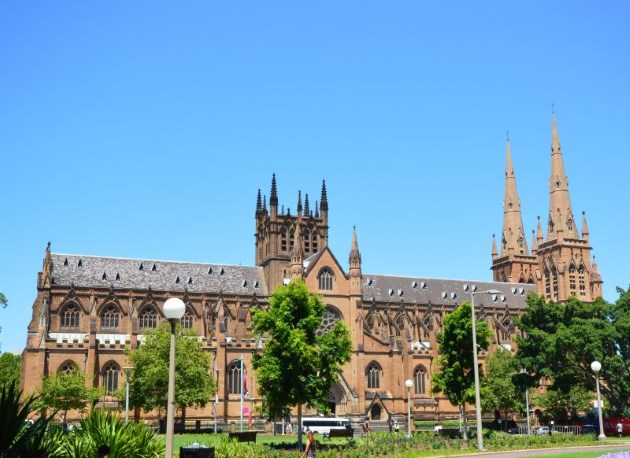 St Mary’s Cathedral is a Sydney Australia landmark, finally being completed in the year 2000 for the new millennium and the Olympics. Situated on College Street in the city’s Central Business District (CBD), it has featured here prominently here since the early 19th Century.

Designed in gothic revival architecture by William Wilkinson Wardell. Located next to Sydney’s Hyde Park on the north east corner, the foundation stone of St Mary’s Cathedral was laid in 1868.

When the land was granted by the government for the building, Hyde Park was but an empty field used for making the sandstone stones that went into the many new major buildings around the city. Today, it is one of Sydney’ most prominent parks, lined with trees and walkways.

However, interestingly, the spires were not completed till the year 2000.

Indeed, restoration work is still ongoing. Also, a chapel had occupied the site, see the picture below.

Father Therry claimed on a number of occasions that he had a vision of a grand cathedral with two spires on the day he arrived here from England in 1820. As they say, a vision must have been true if the result came into being. Well, it has.

That being said, he deserves a lot of credit for the building, he was granted a subtantial amount of land for his services to the colony over the years. That land is where Palm Beach and surrounding suburbs are now, he sold much of that land for the funding of the present cathedral. He died on May 25th, 1864, while the founding stone for the actual building was laid later in 1868.