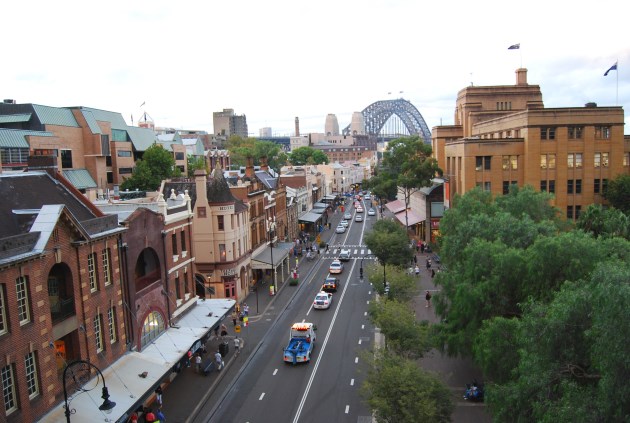 The Rocks, situated in the north west of the Inner City

Next: Bridge and Loftus Streets

The size of Greater Sydney Australia covers some 12,145 square kilometres, stretching north to the Nepean River where it meets the ocean, west towards the Blue Mountains and southwards to Camden, Narelland and Campbelltown. The inner city covers the Central Business District (see the CBD map) Pyrmont and Ultimo, Haymarket and Woolloomooloo.

Chinatown, in the southwest of the city centre, is good for all things Asian, as well as having lots of restaurants and eateries for lunch and dinner:

Located at the foot of the city and part of Sydney Cove. Here you will find ferries, trains taxis and buses that can take you virtually every other part of the city. Also found here is the Sydney Customs House, a major landmark building for more than a century and a half:

Sydney Cove is where the First Fleet landed to begin the Colony of NSW. Located at the foot of the city, you can find the Sydney Opera House, The Rocks and other major city attractions here:

Darling Harbour is a major entertainment precinct for the city. Located just west of the CBD, you can reach here by walking, bus, taxi or light rail. Two museums well worth visiting here are the National Maritime Museum and the Powerhouse Museum. Other attractions include Madame Tussauds, Sea Life Sydney Aquarium and the Wild Life Sydney Zoo:

During the seventies, eighties and nineties Darlinghurst was very much a gay friendly place, with big dance parties, trendy nightclubs and other venues for entertainment. It declined in later years, but has to re-established its prominence as a place to shop, dine and party. Its Oxford Street is still where the Mardi Gras Parade takes place every year:

Map of Darlinghurst and Oxford Sts.

Once the suburb for wealthier workers, professionals and businessmen, Glebe, located just west of Darling Harbour, is an inner city suburb that has retained much of its character:

One of the largest city harbours in the world and certainly one of the most scenic, there is plenty to explore. Islands, parks, beaches, the Northern Beach suburbs, Parramatta, Olympic Park are all accessible from Circular Quay, located at Sydney Cove. Ferries and cruises operate from here as well as Darling Harbour on a regular basis:

The city’s Red Light District by night, it is also a trendy place to visit during the day:

The place where Coldplay’s epic music video of ’A Sky Full of Stars’ was made, Newtown is an old suburb where many workers of the city lived, but now has become a place to eat and party at night

Paddington was the inner city suburb to live in the Seventies and Eighties and still is, it is just that other suburbs around Sydney have risen to the challenge and also have become expensive and hip to live in. That being said, it is still a nice leafy suburb with beautiful iron lace houses lining the streets as it ever was:

This is where the Colony of NSW first housed its convicts, then became a place where ruffians and hooligans would rob hapless sailors in the late 1800s. Now all cleaned up, it is a restored historical district with excellent restaurants, bars and pubs. You can also visit a number of historical attractions here as well as do some excellent shopping:

With Bondi being the closest beach to the city centre it is immensely popular but there actually lots of spectacular as well as quiet beaches to visit, allowing you to get away from the main tracks:

This magnificent cathedral took many years to build:

Attractions in and around Sydney: