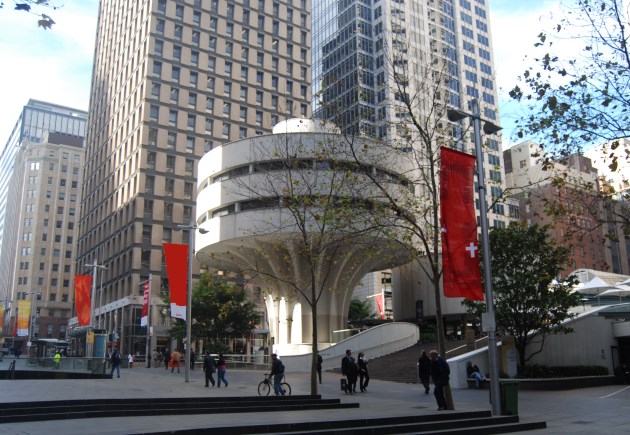 In the City Centre

Next: Inner Sydney Places to Eat

Competing closely with the city of Melbourne, Sydney is the business and commercial capital of the country. Although inner Sydney is comparatively small to the rest of the metropolitan city you can find excellent restaurants, bars and nightclubs, great shopping and things to do day and night.

Martin Place was made traffic free in 1971. During lunch time, this place gets busy with workers who attend the lunch-time free entertainment often held at the amphitheatre:

This is much more than a library for books. Although significant records, photos and archives are held here, there are also delightful exhibits and displays, complete with artefacts, photos and artworks relating to the history of Australia, Sydney and NSW:

Originally designed as a barracks for newly shipped convicts from the various places of the British Empire, it served many different functions throughout the years. Today a museum exists in the original building, which you can visit:

The old Water Police Court now houses a museum dedicated to the social history of law, policing and crime in New South Wales, with artefacts, photos that give you an amazing glimpse into life in the 1800s and much more:

This magnificent building, completed in 1898, has been fully restored to its former glory and is now a very trendy and chique five level shopping centre, as it was designed:

The magnificent Royal Botanic Gardens, adjacent to the Sydney Opera House and on the foreshores of Sydney Harbour, has thousands of plants and trees:

Chinatown, has plenty of Asian restaurants and eateries, as well as events and places to shop for just about everything Asian:

Sydney Cove is where you can find the Sydney Opera House, The Rocks and the Royal Botanic Gardens:

This magnificent cathedral took many years to build:

This is where the Colony of NSW first housed its convicts, then became a place where ruffians and hooligans would rob hapless sailors in the late 1800s. Now all cleaned up, it is a restored historical district with excellent restaurants, bars and pubs. You can also visit a number of historical attractions here as well as do as find bargains with plenty of places to shop: The Rocks.

With Bondi being the closest beach to the city centre it is immensely popular. Sydney Australia actually has many wonderful beaches to visit, allowing you to get away from the main tracks:

More Places in the City Centre

Attractions in and around Sydney: Sydney Australia Attractions.