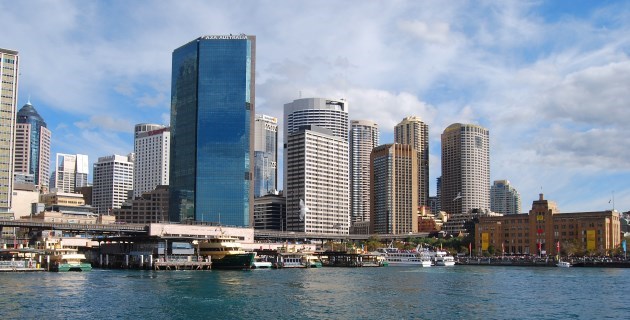 Circular Quay at the foot of inner Sydney

The original village that began to develop around Sydney Cove in the late 1700s quickly grew in size with a complicated maze of small streets and laneways. After the arrival of Governor Macquarie in 1815 and many more settlers, it became a town. As a visionary, he realised a proper city plan would be needed as he believed it would not be long before this penal colony would soon be much more than that.

Long streets were laid, running from the older part of the settlement southwards from Circular Quay including George Street, Pitt St., Castlereagh St. and Elizabeth St. and others. The discovery of gold and the thriving pastoral industries soon afterwards created the wealth that was needed to develop the city’s development. Banks, government buildings and shops quickly replaced the mud huts and small stone houses that first lined these streets. See the Sydney Historical Map 1855.

Macquarie’s plans did not stop there, he had parks and other community facilities created as well. Further out, he planned orbital towns further out, including Parramatta, Campbelltown, Bathurst and eventually as far as Hobart, Tasmania.

George Street is home to many of Sydney’ significant landmark buildings, including the Queen Victoria Building, Town Hall and St. Andrew’s Cathedral.

In the centre of the inner city, Pitt St. is now a shopping mall, with both new and historical shopping malls and arcades:

Along Elizabeth St. there is Hyde Park, government buildings including the Parliament of NSW and can take you to Circular Quay and the Sydney Opera House at the north end of the street. At the south end is:

This plaza has been a major focal point for many of Sydney’s events, while the Train Station at Martin Place can get you to Kings Cross and Bondi Junction:

This amazing museum gives you a varied and interesting view of early life in Sydney and NSW:

Declared a park by Governor Macquarie in 1810:

Housed in an art deco building, a familiar landmark to the many that travel the Sydney Ferries daily, located by The Rocks and on the foreshore of Sydney Cove on the Harbour:

Further out Sydney places to visit:

Attractions in and around Sydney: