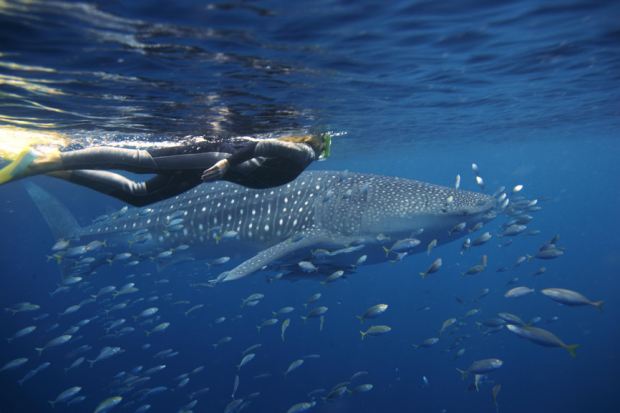 Off the west coast of Western Australia, this 260km long reef is one of the major reef systems of the world. Over 200 types of coral grow here, supporting more than 500 species of fish.

There are a number of places where the reef comes within a hundred metres to the shore, making it easily accessible. At Cape Range National Park, the reef is also not far from the shore, you can see the surf forming waves from the many beaches and viewing sites in the hinterlands.

Fishing on the beach, reef and game fishing at Ningaloo can be done outside of the special sanctuary zones - phone the Department of Fisheries +061 8 9949 2755 for further information. There are daily charter boats departing Exmouth available.

Coral Bay itself is protected by the reef, the views of the bay are magnificent with its white sand beaches. Excellent swimming, snorkelling and diving can be found here.

The marine wildlife in the sanctuary zones include Dugongs.

During the spawning season of the coral, late march, Whale Sharks arrive at the park for seasonal feeding (April to July).

Whale Sharks, are not whales, nor do they eat the same food as sharks. Rather, they have similar physiology to sharks, yet are large and are filter feeders, similar to particular whale species.

They are also not to be confused with to Killer Whales. Also referred to as Orcas, Killer Whales are incredibly intelligent, creative and opportunistic, working together in pods to hunt other species of whales which are usually much larger and can dive much deeper than them. They also eat seafood such as fish, squid, birds, and marine mammals.

Situated on the West part of the peninsula is the Cape Range National Park, with many gorgeous beaches facing the Indian Ocean and surf on the nearby reef. You can take walks to enjoy the views, swim and go snorkelling.

There are cruises available from Coral Bay and Exmouth to try and spot the Whale Sharks when they come to Ningaloo to feed. These gentle giants of the sea can grow up to 18 metres in length, dwarfing any scuba diver who ventures close.

The Whale Sharks also swim close to the surface, at Exmouth and Coral Bay there are cruises available to spot them, usually from March to June.

Tourist information about NIngaloo Reef and surrounds can be obtained from the Exmouth Visitors Information Centre, phone 1800 287 328.

How to Get to Ningaloo Reef

Getting to Ningaloo Reef - There are daily flights to Learmonth Airport, situated on the peninsula and just south of Exmouth by road. Also, there are regular bus services to Exmouth. If driving, see the North Coast WA Map.

At Exmouth, diving cruises, fishing charters and snorkelling gear can be hired from the Dive Centres in Exmouth. Also at Coral Bay and from the Milyering Visitor Centre in the Cape Range National Park.

See more about Pearling at Broome.