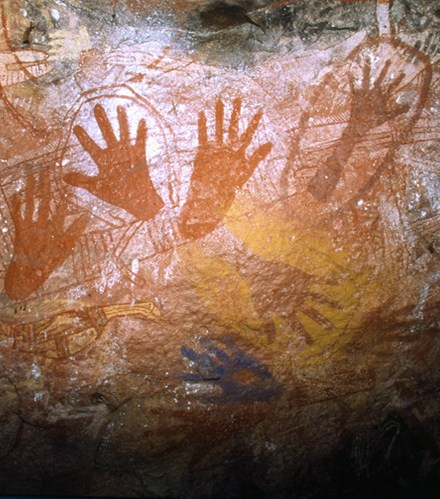 Many examples of rock art created by the indigenous people of Australia is at least as old as the rock art found in Europe, if not older. This ancient art form was created by the ancients to teach and illustrate how to live and survive, how the earth was formed and how animals, plants and humans came to be.

Found in many parts of Australia, some of the best examples of rock art having been found on the remote Kimberley WA coast. The early European explorers, including Watkin Tench, noted that Aboriginal rock carvings were to be found everywhere in the Sydney region. The most notable found so far are the Gwion Gwion human figures, dated over 17,000 years old.

At Kakadu National Park, there are also remaining examples of wonderful rock art that one can visit as well as Arnhem Land and the Dampier Rock Art Precinct.

There are at least 56 sites for every square km. at Dampier Rock Art Precinct. They are remarkable, generally being of higher quality than other examples found in Australia and are believed to date back to at least the last ice age.

The many paintings of animals, fish, reptiles and ancestral spirits date back to at least earliest examples of prehistoric European cave art If not much older. There are even examples of early contact with Maccassan traders from Indonesia, early Australian explorers, WW II warships and airplanes.

Thousands of Aboriginal rock carvings and paintings have been recorded around Australia, as far south as Tasmania, Victoria and South Australia. Some of the greatest rock art galleries are found across the top of Australia, as far away in Western Australia to the far north of Queensland.

At the World Heritage Site of Kakadu National Park, there are three very important sites, Ubirr, Nourlangie and Nanguluwur. Here you see examples of barramundi, catfish, mullet, goanna, snake-necked turtle, pig-nosed turtle, rock possum and wallaby as well as examples of the ancestral spirits from the Dreamtime.

These three sites can be reached in less than an hour’s walk on the well defined and marked tracks.

Go on a safari to Mt Borradaile in Central Arnhem Land, home to many species of flora and fauna found nowhere else on earth. The surrounding sandstone outliers are honeycombed with caves and shelters harbouring thousands of rock paintings.

Spend time with Wardaman elder Bill Harney in the Land of the Lightning Brothers, west of Katherine near the Victoria River. Bill is a living treasure with an encyclopaedic knowledge of Aboriginal lore and stories providing a unique interpretation of some of Australia’s most spectacular rock art.

Tour Uluru with a local Anangu guide to see the rock art through Aboriginal eyes. There are a number of guided walks around the base of Uluru visiting caves, rock art and sacred Aboriginal sites.

Visit the Oak Valley Aboriginal Community, 110 km from Alice Springs, which is an inspirational Aboriginal owned and operated tour business and community. See their Aboriginal rock carvings and paintings and an ancient fossil field, all set in the pristine remote desert country.

Other Places to Visit

South Australia: At the Grampians National Park (Gariwerd is the Aboriginal name for the ranges) and in the surrounds are home to the largest concentration of rock art in southern Australia.

Take a guided tour with an Aboriginal guide from Brambuk to see the profusion of rock art motifs on the orange sandstones in Gariwerd. Brambuk is a visually stunning Aboriginal Cultural Centre located in Halls Gap, only three hours west of Melbourne. Evidence of Aboriginal occupation in this area dates back more than 22,000 years.