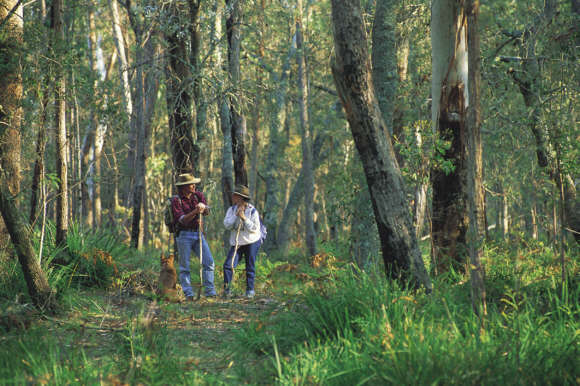 Armidale is known as the ‘3rd City of the Arts’ with a number of festivals celebrating the arts, especially music, theatrical and artwork. There are some 17 national parks and reserves within easy reach, including the spectacular New England and Oxley Wild Rivers.

For history buffs, be sure to check out the Folk Museum with artifacts gathered since 1849. You can also take a free historical tour of the town, leaving at 10a.m. daily from the Armidale Visitor Information Centre.

Bourke was the main port on the Darling river for shipping Wool from south west Queensland and NW NSW to the coast. There are a number of historic buildings dating from the 1860s, such as the restored first Court House and the Court House at 51 Oxley Street, built in 1899 and a true representative of the Federation style.

Bundarra is regarded as a fisherman’s haven and is located on the banks of the Gwydir River, near the Copeton Dam.

Renowned for fishing and the many camping sites along the Barwon River. There are fossicking sites for quartz, topaz, agate and petrified wood. Captain Thunderbolt, the bushranger roamed the area in 1866. While there, try to see the carved trees at Collymongle Station, an area of significance to local Aboriginals.

Gateway to the Outback, some 35kms from Armidale and 1320 metres above sea level. Wing Hing Long, a museum dedicated to the early Chinese settlers, later to become Australians and shows their story, past and present. Excellent bushwalking experiences.

Orange, named after Prince William Orange, is the centre of this agricultural region and known as the Colour City. A number of it’ buildings are from the gold rush days and there is an obelisk that commemorates the Australian poet, Andrew ‘Banjo’ Paterson.

Situated in the mid west of the state, Orange enjoys four seasons, with snowfalls in winter, a green spring, sunny summer and colourful autumn and is an attractive city with wide streets and numerous parks.

The first gold in Australia was found near here at the Ophir Goldfields. There are some nice art galleries worth exploring and attractions there include the bird and wildlife sanctuary at Mount Canabolis, an ancient volcano crater.

In 1880, Opal was discovered at Lightning Ridge. Originally dug out by hand in extreme conditions, the black opals found here were the first in the world. Today, Opal is still mined here and Lightning Ridge provides a fascinating view of the past and present of Outback life.

The Uralla area was inhabited by aboriginals for thousands of years, then by Colonial settlers, booming during the Gold Rush years. McCrossin’s Museum is well worth a visit for the three levels of historical memorabilia and displays, all done with a difference. A number of galleries feature art and crafts made locally.

Where the Barwon and Namoi rivers join, lies Walgett. There, in the 1880s, paddle steamers supplied the many towns along the Murray-Darling River system. Walgett has the Annual District Show in May and the Bulldust to Bitumen Festival in Sept/Oct, amongst others.

There is a good range of accommodation in the North Centre of N.S.W., with backpacker hostels, hotels, bed and breakfasts, farmstays, historic inns and motels as well as resorts. View Accommodation in NSW Australia.

Camping grounds in various national parks is available and some have very well equipped caravan and camp sites.