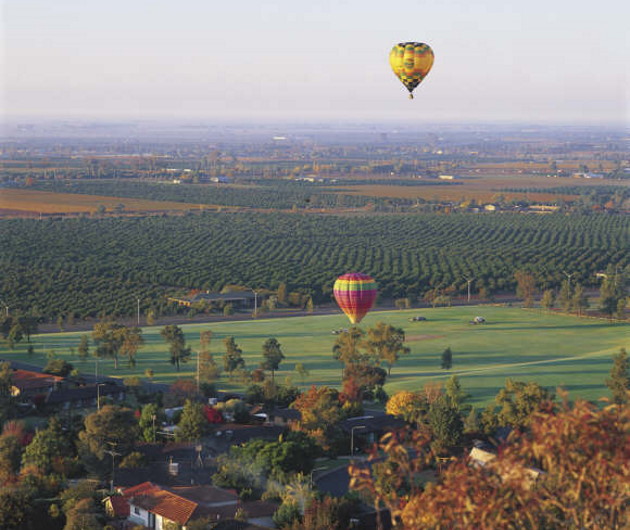 Riverina Region: There is a fine collection of restored Federation-style buildings in the twin cities of Albury-Wodonga, straddling the Murray River on the border of Victoria and New South Wales. Place to visit: Lake Hume is great for fishing and watersports, it is some 6 times the size of Sydney Harbour.

For history buffs, nearby in Corowa is the courthouse where it was decided to draw up the constitution of the Federation of Australia. Dan ‘Mad Dog’ Morgan, the bushranger operated here during his heyday at Culcairn.

Place to visit: Gateway to Mungo National Park, an ancient dry bed lake with sandy, crescent shaped dunes. Human footprints, dating back some 23,000 years have been found here and aboriginal habitation is believed to date back some 60,000 years. There are 5 rivers within easy drive, great for fishing and other watersports.More about Balranald and Surrounds, NSW.

Corowa, on the riverside banks of the Murray River is where the Australian Federation was founded at the local Courthouse in 1893 at the Federation Conference. With a mediterranean climate the year round, it is an attractive township for nice country retreats. Place to visit: Rutherglen, the historic wine growing region is across the other side of the river.

First founded in 1849, the Cowra shire covers some 2,700kms and now is a rich agricultural centre and the Cowra white wines, especially the Charonnay produced there is renowned. There was a WWII prisoner of war camp based there and the site of a dramatic breakout by Japanese prisoners in 1944.

Place to visit: Not far from Cowra, at the junction of the Lachlan and Abercrombie Rivers is Wyangala Waters State Park, a clean vast expanse of water with excellent fishing, boating and skiing, sailing, water slides and different walking trails to explore. You can camp or caravan there and there are bungalows and cottages available.

The Grenfell area was first settled by John Wood and his two sons in 1833, after being guided there by friendly local aborigines. Gold was discovered there in 1866 and became one of the richest goldfields found in New South Wales. The history of town and the buildings are testament to this early wealth.

Nearby Grenfell is the Weddin Mount National Park, beautiful pristine bushland and hideout to one of Australia’s most notorious Bushrangers, Ben Hall. There are rumours of a rich treasure hidden there by him after a daring coach robbery where over 14,000 pounds of gold and cash were stolen. Camping facilities are available at Holy Camp and at the Ben Halls area.

In the heart of the Riverina area is Leeton, known as the central Australian rice producing area and home to Sunrice. There is a Sunrice visitor’s Centre, which traces rice from paddock to the dining table, offering great recipes and cooking demonstrations.

Leeton produces much more than rice, as the Riverina is known for its citrus production as well as wines and cheeses. There is a good collection of restaurants giving you a chance to sample the local fare and wines.

Known as the ‘Cherry Capital of Australia’, the National Cherry Festival is held here in late November, early December every year. Gold was discovered in 1860 there and gave the area a rich and bountiful start. Today the Young area is known for their cool climate Hilltop wines and foods.

Young was the first country town in Australia to get electric power for their homes and industry in 1889. The town has been growing steadily since then and is now regarded as one of Australia’s fastest growing centres.

There are a number of museums and galleries in Young, as well as the Lambing Chinese Garden Tribute at Chinaman’s Dam. Beautiful and tranquil throughout the year, there are picnic and barbeque available for your enjoyment.