Map of the Riverina Region, NSW

Next: Balranald and Surrounds, NSW

The fertile region of the Riverina in NSW has plenty to offer visitors wanting to explore inner Australia. Reaching from the Outback to the west part of the Great Australian Divide, there is history, national parks, heritage and culture to explore.

The region, fed by the Edward, Murrumbidgee and Lachlan Rivers is considered to be the food bowl of Australia, endowed with farms and wineries that will tantalise and delight visitors with the freshest of produce, gourmet foods and excellent wines. Restaurants and eateries, serving foods that feature diverse authentic cuisines from Europe to Asia using local ingredients, is a result of the many immigrants and their families that have made their home here over the years.

Exploring the many places to visit here includes scenic drives.

On the border of NSW with Victoria, are the twin towns of Albury and Wodonga, divided by the Murray River. Paddlesteamers once plied this river in the second half of the 19th Century, bringing settlers, prospectors and goods upriver, returning with beef, wool and farm produce:

The towns of Corowa, Howlong and Yarrawonga, set along the Murray River near the border of Victoria has watersports, gourmet foods, wines and nature to enjoy:

Located on the Edward River, there is plenty of heritage, wildlife and nature to explore:

Griffith is the regional centre of the Murrumbidgee Irrigation Area and today is a thriving city.

Place to visit: Pioneer Park Museum tells the pre-history and history and growth of the Murrumbidgee Irrigation Area and Griffith with an interesting bush furnishings and equipment display.

Cocoparra National Park is some 25kms away, has lots of wildlife and is one of the rare but beautiful forest remnants of the Riverena area.

Gundagai, made famous in Australian literature and home to the ‘Dog on a Tucker Box’. The longest wooden bridge in the southern hemisphere straddles the Murrumbidgee river here and since the town is almost half way between Sydney and Melbourne it has become a popular stop off point for travellers.

The town of Hay in the Riverina region of NSW is on the Murrumbidgee River. With five museums, festivals and events, wineries to visit and country living, visitors will find plenty to do and see.

The designer of Leeton was Walter Burley Griffin, and still retains its circular streets and roads:

Wagga Wagga, a modern city with an Aboriginal name from the traditional owners of the land, the Widadjuri, means ’Many Crows’. A garden city, because of its many green gardens and parks, is a commercial centre for the many farms and wineries in the surrounding area.

The restaurants here feature foods produced in the nearby farms, along with the many regional wines available here. You will find a number of them on the main street, Fitzmaurice St. and in its side streets.

The Cocoparra Range, waterfalls and waterways are what mark this beautiful park. In the spring, wattles, wildflowers and orchids bloom.

Birdwatchers and nature lovers delight in the many bird species that live or migrate through here, including soaring peregrine falcons. Other species include speckled warblers, diamond firetails and on the ground, heathwren.

The Wiradjuri people walked this land, the name Cocoparra is their name for Kookaburra. Numerous sites where they lived and used are still here.

The Long Paddock, formed in 1840s. This route from afar as Queensland and the far west of New South Wales had and still does have and important role to play in the economy of both states: 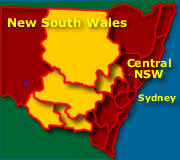