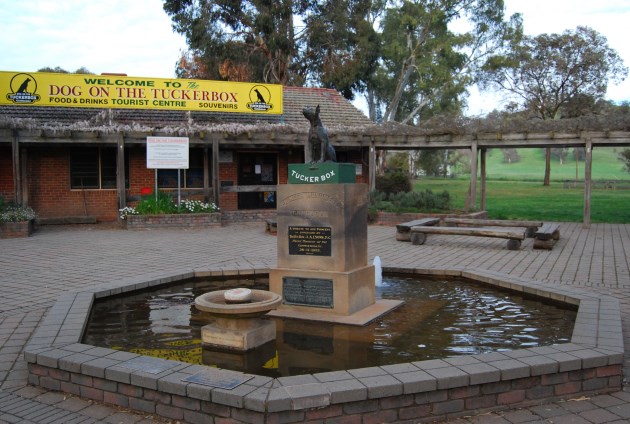 Celebrating the legend of ’The Dog on the Tuckerbox’ Gundagai

Next: Hay and Surrounds, Riverina

Set on the Murrumbidgee River, Gundagai has inspired folklore, poems and songs and is very much seen to be the quintessential Australian country town. Recently, it has been declared a wine region, with award winning wineries in the surrounds of town.

Visitors may want to visit the art galleries and antique shops that are scattered around the town, for that special item or even bargain. Lanigan Abbey, housed in the old convent school has works on display from noted Australian artists, including Norman Lindsay, Pro Hart and Arthur Boyd.

Dog on the Tucker Box

The ’Dog on the Tucker Box’, on the road to Gundagai from Sydney (8 kms north of town) is the sculpture that celebrates the story of the trials of Bill the Bullocky, a bullock wagon driver who, while trying to drive his wagon across a creek became hopelessly bogged in the mud. After much trying to get it out, his oxen’s yoke broke. He gave up to have his lunch. Unfortunately, after all that effort, he found his dog sitting on his tucker (food) box. Had it eaten all the food? Questions remain.

The tale is was eventually described in a poem written by an anonymous poet who went by the name ’Bowyang Yorke’ and later, another by the famous Australian poet, Jack Moses and songs. The monument is dedicated to the pioneers and bullockies that had opened the road that made the region possible for settlement. The annual Dog on the Tuckerbox festival is held here.

At the Railway Station, now restored to its original glory, there are artefacts, photos and associated railway memorabilia of historic interest. Phone + 061 2 6944 3929 for more information.

Exploring the pioneers and early history of the region, including the bushrangers that roamed here. With everything from a model T Ford to machinery and equipment used for farming, as well as items used by the early settlers to make a life here from the 1800s and early 1900s, there is much to see. Phone +061 2 6944 1995.

There was a massive flood that swept away the town in 1852, many died except for those saved by two Aboriginals, Yarri and Jacky, who managed to save a number of the residents. The museum has the medals that were afterwards given to them for their acts of bravery.

The photos of Dr. Charles Louis Gabriel, an avid photographer who was the town’s doctor, are housed here. They trace much of what happened and what life was like here for forty years, from 1887 to 1927.

Beginning at the Visitors Centre on Sheridan St, the Heritage Walk takes you past historic buildings including Dr. Gabriel’s home.

The Gundagai Visitor Information centre, located on Sheridan St. in town, has all kinds of useful information on accommodation, places to visit and things to see and do. Phone +061 2 6944 0250. Of interest at the centre is hand made marble model of a cathedral, incorporating 20,948 indidividual pieces.

South east of Gundagai are the Snowy Mountains, a natural wonderland in the warmer months with crystal clear tributaries, mountain vistas and forests. In the colder months, there is every winter sport imaginable available: Snowy Mountains.

Directly east is the city of Canberra of the Australian Capital Territory, with national museums, monuments and art galleries: Canberra ACT.