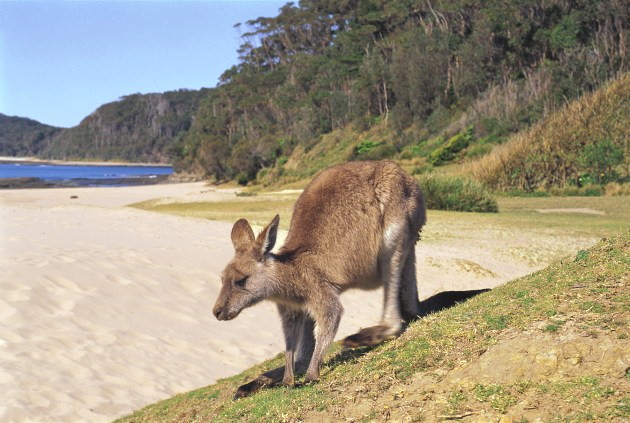 This park, in the north west of New South Wales, comprises a vast area (493,434 Hectares) has quiet forests with an amazing array of Australian wildlife and birdlife, canyons and cliffs. There are secluded beaches lining the Colo River and historic ruins to be found at Newnes.

Backpacking is allowed in the park, the roads are unsealed and has plenty of easy and accessible walks. Phone the National Parks Centre for information about this park and others throughout the rest of New South Wales at 1300 361 967.

Located in the Snowy Mountains, this park has the highest mountains in Australia. In winter, there are snowfields and ski resorts that cater for skiing, snowboarding and just about everything else to do with snow, while the rest of the year you can enjoy the alpine splendour. The highest parts of the park can be explored only during the warmer months, but there are plenty of walks and exploring to do anytime of the year. See more about the:

Both the Willandra Lakes and Mungo National Park are in southwest corner of NSW. Apart from its stark, silent and largely desolate beauty, the region provides a unique study of human evolution. Skeletal remains found indicate that there was human occupation in this region going as far back as 40,000 years.

Archaeological finds include an amazing 26,000-year-old cremation site and tools over 18,000 years old. Preserved fossils of giant marsupials such as Tasmanian tigers, kangaroos, echidnas and bats have also been found here. Huge kangaroos that hunted and devoured flesh? Scary.

The region is visually stunning, making it popular with filmmakers and photographers. Visit the striking Walls of China formation in the Mungo National Park, or book in with the professionals for an interpretation of the countryside Harry Nanya Tours run accredited, Aboriginal owned tours of this unique region.

Try not to miss the lookouts at Wollomombi and Long Point. Early birds will also love the beautiful sunrises over the summit of Mt. Warning. This is the point where the sun’s rays first hit Australian east coast. You can find environmentally friendly guesthouses in the region offering bird-watching, nature and horse riding tours and there’s also the chance to go white-water rafting, fishing or kayaking.

Lord Howe Island Group is 700km northeast of Sydney in the Pacific Ocean. This group is significant for many reasons natural beauty and its provision of a habitat and breeding ground for threatened species (such as a rare type of petrel). However, it’s the diverse, largely-intact ecosystems that have earned the island group its World Heritage listing.

Lord Howe and its surrounding islands are accessible by air and sea, and make a great holiday destination for photographers, divers, sailors, surfers, bird watchers and those who just like lazing about! Tourist numbers are limited, which is perfect for nature lovers.

There are numerous parks on the stunning South Coast of NSW. In fact they cover vast natural areas, from the beaches to the mountains, even marine parks, protecting the environs, flora and fauna:

Also on the South Coast with beautiful lakes, waterways and ocean vistas:

Murramarang National Park on the South Coast has secluded beaches and spectacular scenery. You can find sea caves, secluded beaches, cliffs and headlands with grand views. Native animals and birdlife thrive here, the park is draped with forests of eucalypt down to the ocean.

There are five World Heritage-listed sites in NSW, each with its own natural beauty and significant cultural and environmental importance. The Sydney Opera House is Australia’s most recent addition to this exclusive and prestigious list:

Sydney with its unique harbour is practically surrounded by natural bushland parks, The Royal National Park to the south, in the west, The Blue Mountains NP while in the north Kuringai Chase NP is where the Hawkesbury River meets the ocean:

Much evidence of ancient Aboriginal culture and heritage remains in many of the parks, the land and the natural habitat in these places have spiritual significance that is still strong today, so please respect the national parks in NSW and in Australia when you visit. A number of the parks are actually under the control of Aboriginal tribal councils and the Department of Environment and Conservation (DEC).

You can also find out more information about these NSW parks (over 200 hundred protected areas) throughout the rest of New South Wales by phoning 1300 361 967.

See more about the:

National Parks and Reserves in Australia