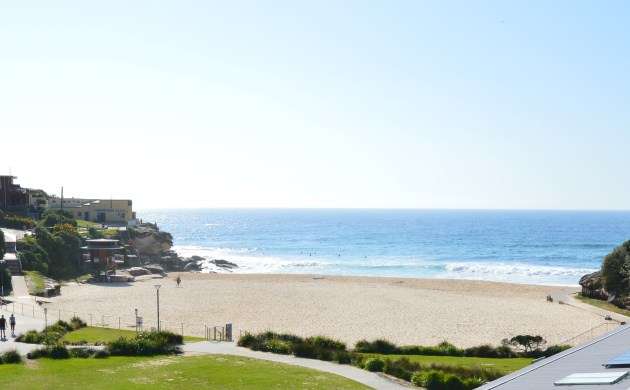 A smaller beach by Sydney standards, it is a picturesque beach tucked away between the two headlands.

One can enjoy the park behind the beach or the sand. In the park, there is a number of places to picnic with the family or friends.

Tamarama Beach also has facilities such as free electric barbecues and for the children there is a playground. There are wide grass areas for them to enjoy as well as the beach.

There is ample shade from the trees along the sides of the park as well as shaded places to sit.

Tamarama is situated between Bondi Beach and Bronte Beach on the Eastern Beaches Coastal Walkway.

The Eastern Beaches Coastal Walk goes along the beaches and headlands from Bondi Beach all the way south to La Perouse. There are great views to be had along the way, if your lucky, you may see whales passing along the way north or south on their annual migrations.

In the spring, there is the Sculpture by the Sea, an art event with works of art displayed along the walkway. As well, near the beginning of the walk there is Mars Park, with its Aboriginal rock carvings.

The Bondi to Coogee section, some six kilometres long, encompasses six Sydney beaches. Besides Tamarama, Bondi and Coogee, there is Bronte and Clovelly. See the Sydney Southern Beaches Map.

The surf is known to get fairly big here, due to the natural shape of the beach and the narrow headlands. Swimmers need to be aware of the rips and cross-currents that form during big days, but also on relatively peaceful days. The beach can be closed if it is too risky.

When the red and yellow flags are displayed on the beach it means it is being patrolled by surf life savers. Patrolled by the Tamarama Beach Surf Club, they are there for you and your family’s safety. Please only swim between the flags.

Tamarama was once home to the Royal Aquarium and Pleasure Grounds. They had marine life tanks, with sharks, some penguins and even a penguin.

Opened in 1887, it occupied the space that is now Tamarama Park. Rides included roller coasters and roller skating rinks. Later, a miniature railway ran along the cliff edges while above the beach there was an ’airship’. The amusement park closed in 1911.

Size of the Waves

On particular days the surf can get big, with cross-currents and rips. Only strong swimmers should venture out, but between the flags. Board riders, boogie board riders and body surfers can usually find a good spot to take advantage of the larger waves.

There are plenty of beaches all along the coast to enjoy. There are also beaches on the shores of Sydney Harbour that are usually much calmer than the surf beaches for swimming and young ones.