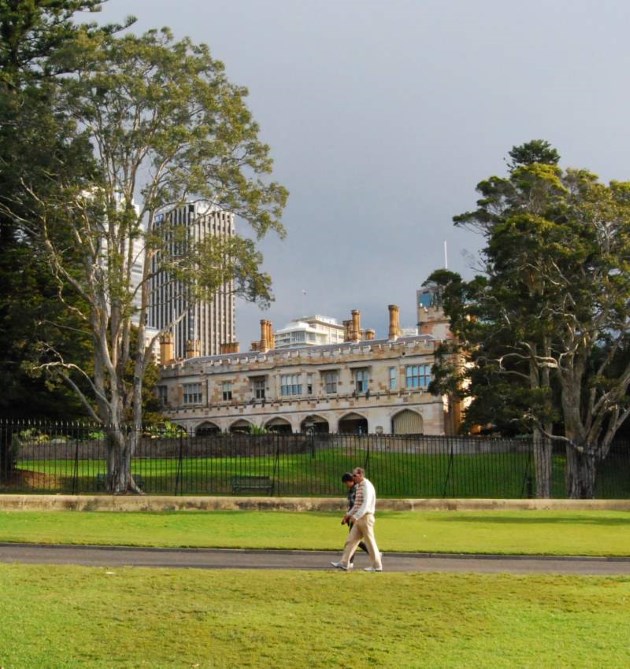 After the First Fleet landed at Sydney Cove, the government was first run from a large tent established on the north hill overlooking both the cove and what was then called Port Jackson (Sydney Harbour). On the opposite side, on a rocky bluff, it was decided to house the convicts, first in bark humpties. This place is now called The Rocks.

Not much later, the first governor of the new Colony of New South Wales, Arthur Phillip, decided to establish the first Government House on Bridge Street. See the Map: 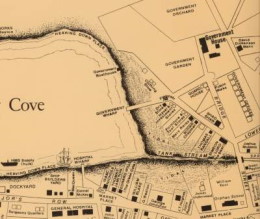 Eventually, the first Government House proved inadequate for the needs of the NSW colonial government, so it was decided to build a much larger residence and offices where Governor Phillip had first put up the government tent, on the north side of the cove. Built on the Government Domain, it had and still has splendid views.

The first house became the first Sydney Town Hall when the new Government House was finally completed in 1845, having been started in 1836. The new house was designed in a similar facade to the Government Stables (now the Conservatorium of Music) in Gothic Revival and medieval castle style.

The building was designed by Edward Blore, who had made his name by working on Buckingham Palace and Windsor Castle previously. Today’s building has been modified and extended a number of times since its original construction by successive governors through the years.

Surrounded by a historic garden, Government House is accessible from Macquarie Street. Located near the Sydney Opera House and the Royal Botanic Garden it has grand sweeping views of Sydney Harbour, the Botanic Gardens and surrounds.

The house is noted for its splendid collection of period furniture and artworks, as well as its manicured gardens and views. Tours are available of this historic house. However, it is still used as a residence and offices for the Governor of NSW and there are official functions throughout the year, so it is not available at all times.

Map of the Central Business District (CBD) showing the location of Government House next to the Sydney Botanic Garden and the Opera House:

Previous: Fort Denison on the Harbour