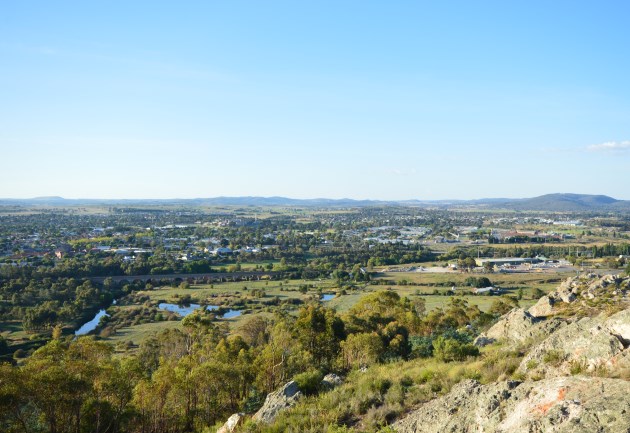 View of Goulburn with the railway in the foreground

The city of Goulburn can trace its history with those seeking gold, both bushrangers and miners, beginning with the convicts sent here to build its foundations in 1863 under NSW Governor Lachlan Macquarie.

Here you can find a growing and diverse collection of great places to eat and a wide assortment of things to do. There are also plenty of places to visit, particularly for Australian history buffs.

The arts are not neglected, from working studios to galleries. Music, sports, horse and car racing are all represented here to give you plenty of activities to fill your days.

In the surrounds of the city, experience the quiet rural scenery on country roads, from the verdant wide valleys to the mountains. The small country towns here provide delightful chances to shop for antiques, artworks, craftworks and the freshest of produce.

Located about 2 hours drive from Sydney or a one-hour drive from Canberra, the city’s central location continues to attract visitors to this historic place. Trains from Sydney and Canberra stop at the main train station here, most of them being the Southern XPT and Xplorer trains.

Goulburn, with one of its attractions being the Big Merino, the world’s largest concrete structure in the shape of the large sheep, has others just as remarkable.

Found alongside Wollondilly River at Marsden Weir, the Goulburn Historic Waterworks Museum has interesting displays and machinery dating back to the 19th Century.

Visible from almost anywhere in the city of Goulburn, the large tower that serves as a memorial to the Australian soldiers who fought and died during WWI and later, WWII. Alongside is a museum:

This National Trust protected home was originally built as a wayside inn for the hungry and thirsty travellers that came through this countryside.

Capital Country is the NSW region surrounding Canberra and the ACT. This part of Australia includes the Southern Tablelands to the south, with the Southern Highlands in the north:

Explore the snowfields of NSW and Victoria: