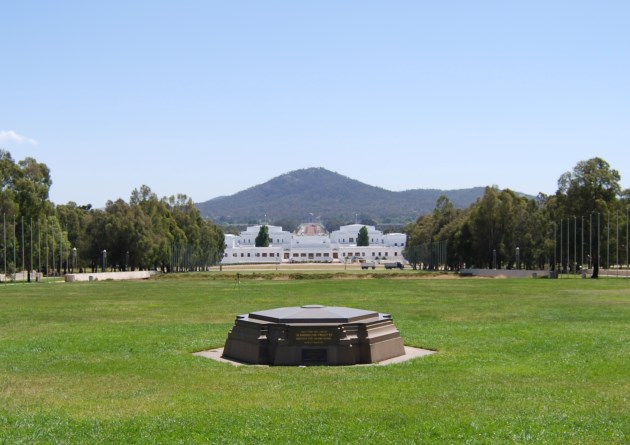 Although the site of many ceremonies since its initial laying down, the Canberra Foundation Stone was significant in the fact that it marks the beginning of the many works that make the city what it is today. More importantly, it marks the announcement of the official name of ’Canberra’ by Lady Denham and commemorates the official founding of the city.

It had been decided the capital would be in New South Wales, but at least 100 kilometres from the location of Sydney.

The then Governor General Lord Denman, Australia’s Prime Minister Andrew Fisher and the Minister for Home Affairs, King O’ Malley originally laid three stones on the 12th of March 1913 as a marking for a Commencement Column. One stone was assigned to each of them, made from trachyte stone sourced from Bowral.

This Commencement Column, to date, has never been completed and was moved from its original location. However, the stone does mark a formal ceremony for the selection of Canberra as the site for the federal capital of Australia as set out in the Constitution (Section 125).

The monument when originally designed was to consist of six stone blocks, one for each of the States. A granite obelisk eight metres in height was to stand above the base, but a stone cap was put there in place in the late 1950s.

Seventy five years later, on the 12th of March, 1988, another ceremony was held to mark the moving of the stones to their present location, attended by the Governor General, the Prime Minister and the Minister for the Arts and Territories.

When Australia entered WWI, no substantial work was carried out in Canberra during the four years of war, including on the Commencement Column. When the work on the new Parliament House was begun, the stones were moved to the green area between the old and the new buildings of Parliament, where they are now.

Places to Visit in the ACT

Topic: Places to Visit in Canberra and the ACT