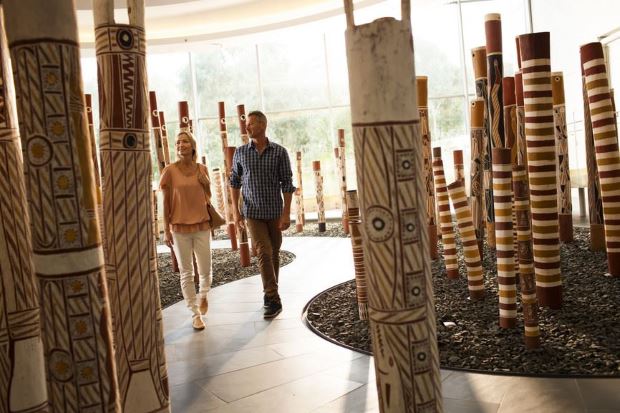 The Aboriginal Memorial at the National Gallery of Australia, Canberra - Photo: Adrian Brown

Places to Visit in the ACT

Map of the Australian Capital Territory: Maps of the ACT.

The planned city of Canberra in the Australian Capital Territory has many visitors, both from Australia and world wide, not only because of its national importance but its many attractions, monuments and other places to visit. National Museums such as the Museum of Australia, the Australian National Botanic Gardens, the National Aquarium and Zoo and New Parliament House have significant collections worth seeing for yourself and the family.

12 March 1913 saw the laying of the Foundation Stone of Canberra, in what was then described as not much more than a sheep paddock.

Located in the Snowy Mountains just to the west of the ACT, this park has the highest mountains in Australia. In winter, there are snowfields and ski resorts that cater for skiing, snowboarding and just about everything else to do with snow, while the rest of the year you can enjoy the alpine splendour. The highest parts of the park can be explored only during the warmer months, but there are plenty of walks and exploring to do anytime of the year. See more about the Alpine Snowfields of NSW.

Topic: Places to Visit in Canberra and the ACT